Are we Finally Starting to Turn the Corner? - Part II

Four years ago, in the Spring 2015 edition of the Florida Elks News, the title of my article was “Are We Finally Starting to Turn the Corner?” In that article I championed how close we had come to a statewide membership gain (195 members) and noted that we had started the year 55,851 members strong! I also wrote about my observation of the new officers for 2015-2016 from the officer training seminar and remarked that the year’s crop was “one of if not the best” I had ever seen. I wrote about respecting members as volunteers and owners and reminded that a lodge is its members, not the lodge building. I wrote about inviting members who were not team players and who could not work with others or for the good of the lodge to find other pursuits where team is not important. I wrote that we should not give a forum to those who seek to do nothing but profess their knowledge of the statutes or who attempt to only enforce a statute or a rule when it favors them. And, I wrote about the time it takes for an organization to enact organizational change, at the time suggesting my perception was three years.

Now fast-forward to Spring 2019 and allow me to stray a bit from the hard-hitting introspection I usually write about to suggest that it was four years, not three, but nonetheless, I think we are doing it! I believe we are finally starting to turn the corner! 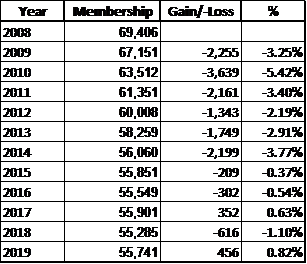 I talk with a lot of our members across the state and visit with them often in their districts and at events. After 17 years of on-the-job learning, trust me when I tell you that I hear about the problems that beset our lodges. Naturally, I apply a filter that for each compliment I hear, there are usually 10 complaints. However, most revealing this past year has been the lack of complaints! This tells me things are settling down in our lodges and perhaps contributing to the optimism we are seeing in the numbers. Finally, there are the managers and leaders of our lodges. A few articles ago I challenged lodges to extend the term of a good Exalted Ruler for a second year if you have one. Twenty-eight of our 94 lodges, or 30%, chose to do just that for the coming year, perhaps at the detriment of moving officers forward and through the chairs, but hopefully it’s a good move as we slow the pace of our operations and focus more on training great leaders and promoting teamwork and achievement.

Looking at the membership chart above once again, it begs this question: what happened in 2015 that changed the tide and began the revolution? The answer began in 2011 after the state suffered its largest ever one-year loss of over 5% of our membership. Urged by then-national president, Jim Nicholson, to “throw some money” at addressing our membership losses, the Florida Elks embarked on a five-year campaign to do just that. It began with the promotion of our then-State Membership Chairman, Don Moon, to a paid, part-time staff position. Then, off we went. Don began a listening tour and visited lodges and districts across the state to learn more about the problems and to educate our members on what was happening. This led to a think-tank initiative utilizing innovative movers and shakers and members from across the state and later to a liaison effort made up of representatives from every lodge in the state. Those efforts culminated in the first ever 29-page Florida Membership Development Guide written to supplement the Grand Lodge Membership Program & Planning Manual. This Florida guide is still in use today. Find it at floridaelks.org/images/stories/FSEA/pdf/liaison_book_may_2012.pdf. Soon thereafter, the Grand Lodge, too, launched an effort to address membership by creating the position of Membership & Marketing Manager on the national level. We know him as Rick Gathen, a dynamo who has brought his motivational message to Florida numerous times and who is leading the charge nationwide. Incidentally, Rick will be with us again at our upcoming state convention in May where he will be debuting the latest in helpful membership growth aids, a new virtual Grand Lodge Membership & Marketing Manual. Bring your laptop! Also, joining us at our May convention will be Area 3 Auditing & Accounting Member, Andy Milwid, to answer all your pressing questions. As always, we will also have a Q&A session with our state Business Practices folks. These are sessions you will not want to miss!

The saying that it takes a village to raise a child applies also to Elks in that no member or lodge is an I-sland; we must all work together to continue the revolution that will propel our lodges to prosperity, but, more importantly, sustain the good works we are doing in our community in support of those less fortunate than ourselves. The order of Elks has been in existence for more than 150 years. We may change slowly, but change we do, and it is why we will be around for another 150 years!

The Spring 2015 article referenced above is included in an archive of my articles accessed through our website at https://floridaelks.org/carls-corner. While there, join the conversation by logging in and posting your comments.

# William Dukette 2019-05-27 10:14
Carl,
Great message, on point. I have been a member for two years and am very impressed with the Elks organization and most particular of our South Lake lodge. Strong transparent leadership skills are evidence of our successes and are driving our growing lodge in many dimensions for the future.
Refresh comments list
Member Login/Registration Required to Post Comments.
Click here to log in
JComments
© 2021 - 2022 Florida State Elks Association, Inc.
Privacy Policy
Terms & Conditions