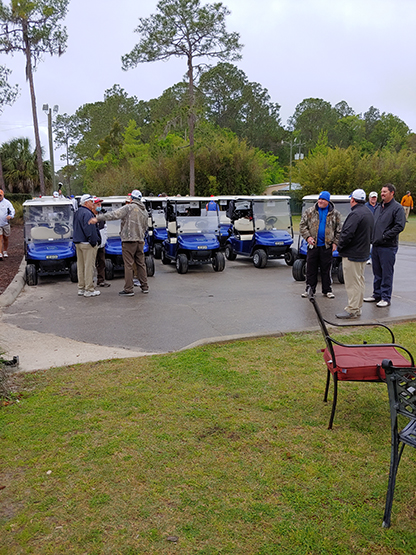 On March 21, the 40th annual Gainesville Elks golf tournament took place after two prior cancellations due to the pandemic. Seventy-four players attended and more than $5,000 was donated to charities from this event. 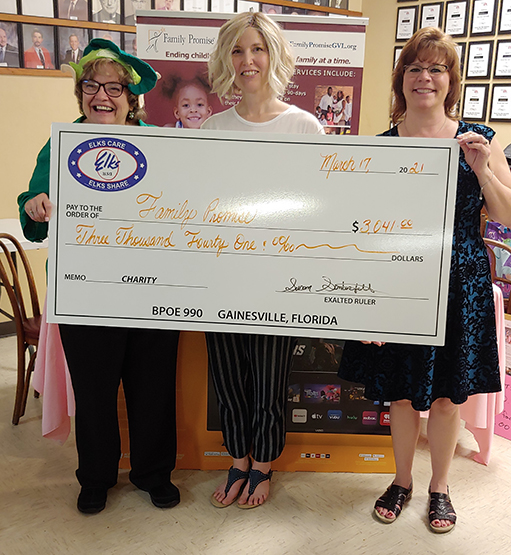 Gainesville Lodge held a drawing for a 50" TV March 17, with all donations benefiting Family Promise of Gainesville, which provides families experiencing homelessness with compassionate care that includes case management, education, housing, meals and transportation until they can transition to a home of their own. A check for $3,041 was presented to Jayne Moraski, Executive Director, by Betty J. Sullivan, Lecturing Knight (left), and Susan Senterfitt, Exalted Ruler (right). 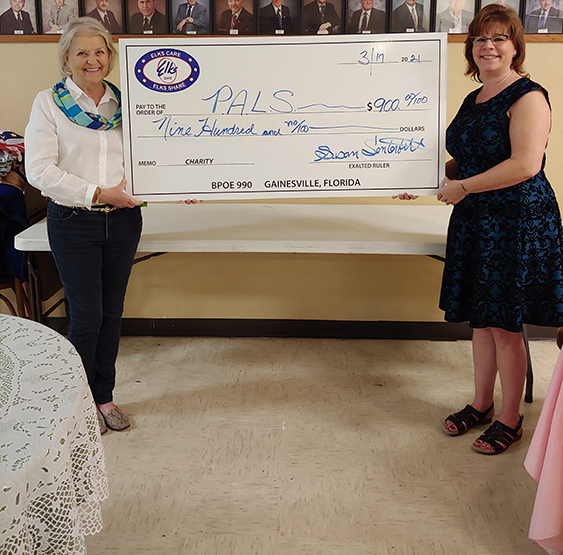 On March 17, Gainesville Elks Lodge #990 presented a $900 donation to the PALS (Partners in Adolescent Lifestyle Support) program. PALS THRIVE strives to prevent suicide, violence and bullying by providing an inclusive atmosphere in schools and professional intervention and programming. The $900 came from the lodge’s award for first place in the State President’s grant competition. New member Lynn Read accepts the donation from Susan Senterfitt, Exalted Ruler. Read has supported PALS for years. 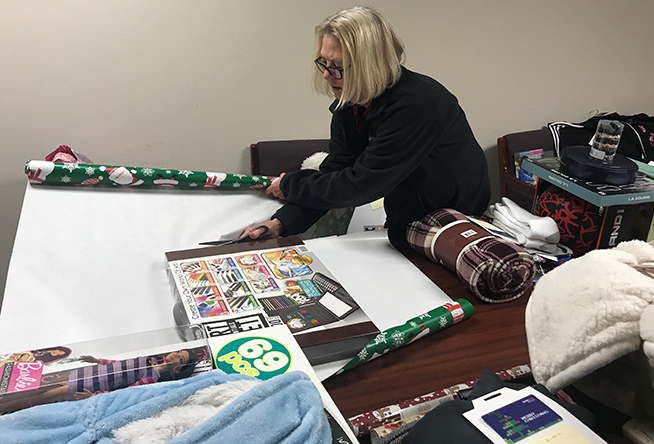 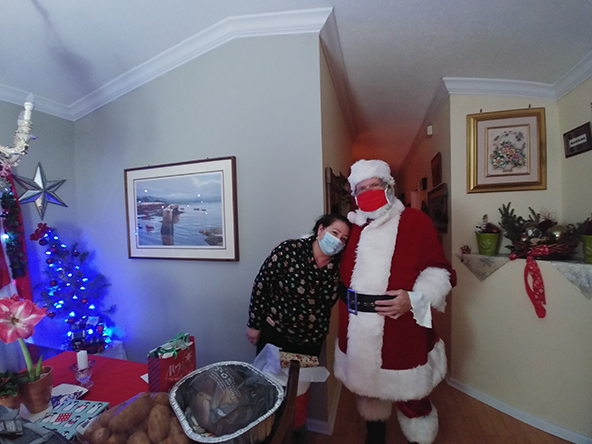 Using approximately $1,450 of its Elks National Foundation Beacon Grant, Jacksonville Elks Lodge #221 provided six local families with Christmas gifts and a holiday dinner which were delivered by Santa. Members enjoyed shopping, wrapping and delivering all the gifts to the families. Chair of this project, Betsy Bryant, is pictured wrapping gifts. Santa is also pictured with a thankful mother. 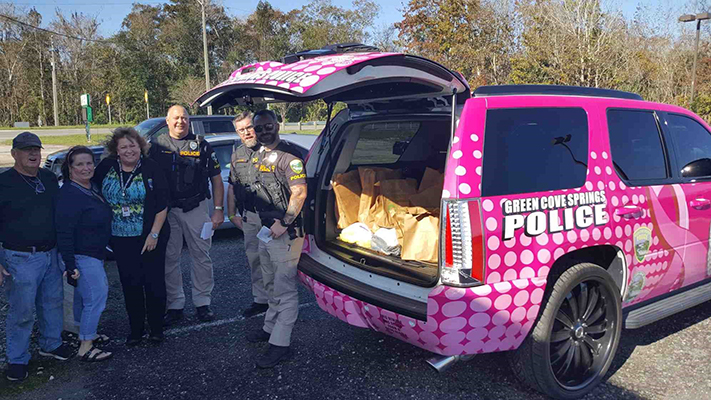 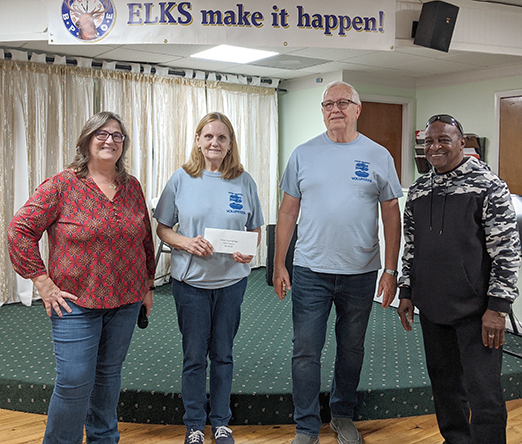 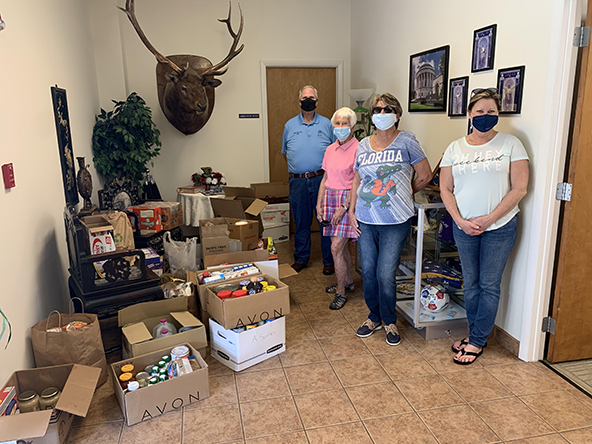 Jacksonville Elks Lodge #221 held another joint shredding event and food drive Nov. 14 to benefit Feeding Northeast Florida, an organization in Jacksonville that helps local children and families, seniors, and active and retired military members who struggle to put food on the table, especially during the coronavirus pandemic. The lodge received a donation to pay for the shredding truck to be on hand at the food drive to draw attention and entice the community to drop off documents to be shredded in exchange for a donation of nonperishable food. Including lodge members’ recent food donations, the total after this event amounted to 628 pounds of food which is enough for 525 meals. Pictured are William Watson, Exalted Ruler; Pat Harth and Kathy Glass, members; and Robin Pipkins, Elks National Foundation Lodge Project Coordinator. 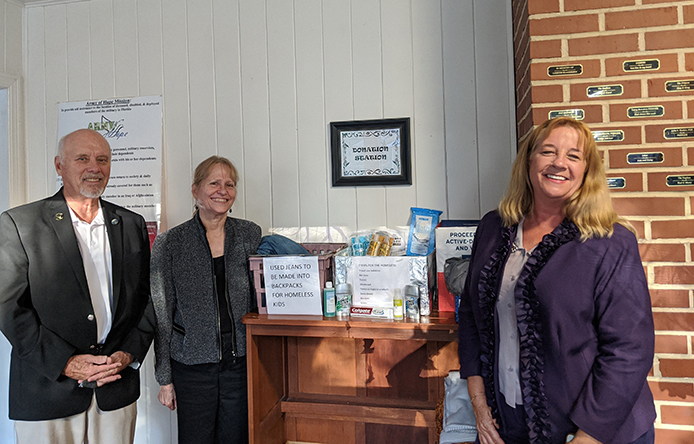 Mandarin-St. Johns Elks Lodge #2866 has been supporting their local community through several collection projects. The lodge has partnered with a group from Jacksonville, Florida, called The Rippers, a group of local women who use their love of sewing for community needs. They are turning donated jeans into backpacks for students who are homeless. Lodge members have donated approximately 30 pairs of jeans for this project. The partnership was formed after a lodge member read about them in a neighborhood newspaper. The lodge is also continuing its tradition of collecting travel-sized toiletries which are then donated to the City Rescue Mission in Jacksonville. The City Rescue Mission provides food, clothing, shelter, emergency services, and residential recovery to those who are homeless. Lodge members have donated approximately 100 travel-sized toiletries. Pictured at the lodge’s collection station are Paul Orvosh, PDD, Lodge Advisor; Christie Easton, Lodge Secretary; and Diane Thompson, Loyal Knight. 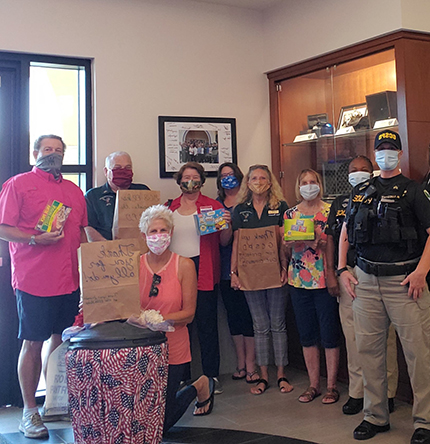 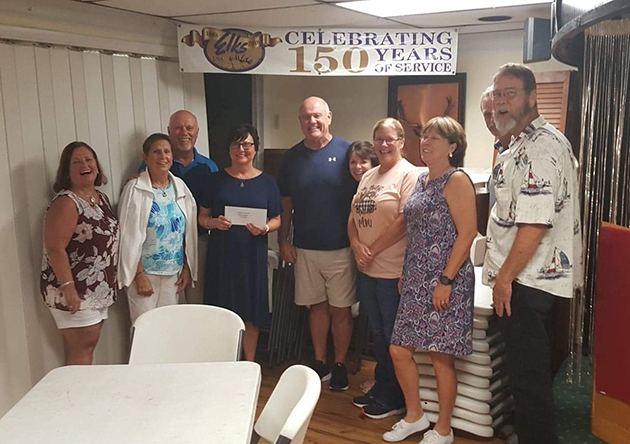 The members of Green Cove Springs Elks Lodge #1892 donated $1,000 to Charles E. Bennett Elementary School and presented it to Dr. Cagle, principal, Sept. 9 at the lodge. The donation will be used to provide teachers and students with school supplies. 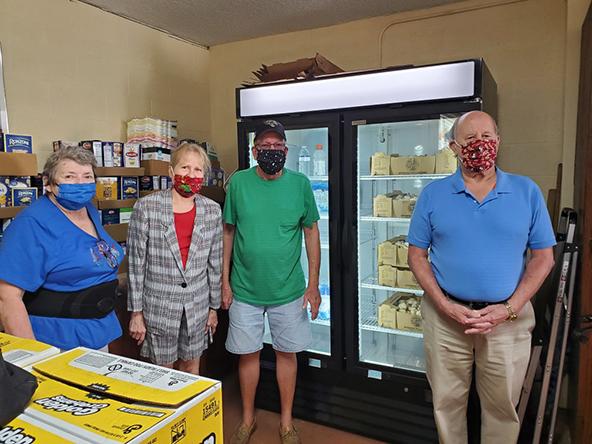 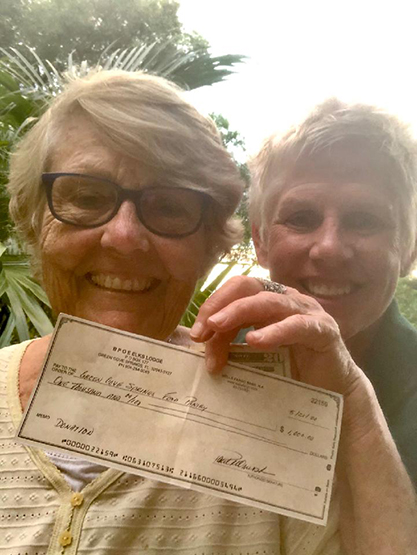 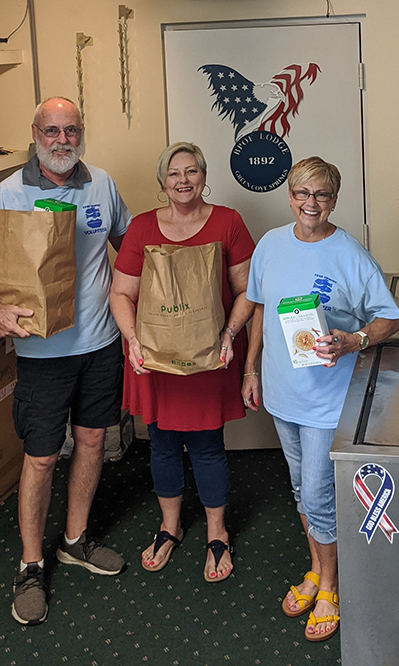 On May 21, Green Cove Springs Lodge donated $1,000 from the lodge PER/charity bingo fund on behalf of lodge members to the Green Cove Springs Food Pantry. Cheryl Royal, Lecturing Knight, is pictured presenting the check to food pantry volunteer Wynema Lovell. Throughout May and June, lodge members have brought nonperishable food to the lodge and members Gale and Nancy Klopfenstein, who are also volunteers at the food pantry, have helped coordinate and deliver the items each week to the food pantry. Pictured organizing food donations at the lodge are members Gale Klopfenstein, Patsy Weston and Nancy Klopfenstein.