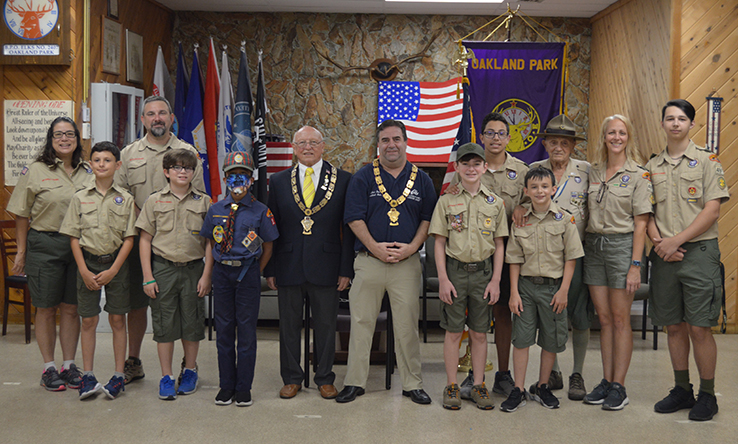 Hollywood West Elks Lodge #2365 was the winning lodge in selling the most stars for autism awareness — more than 200 at $5 each. District Deputy Donna Powers challenged the lodges in the South Southeast District to sell the most. The lodge received an award from Powers at the District Deputy clinic in April. 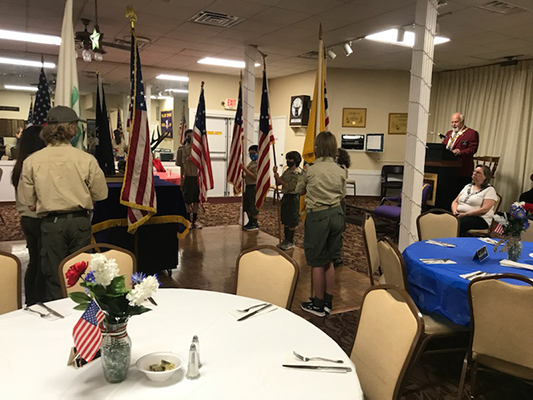 Boca Raton Elks Lodge #2166 held a Flag Day ceremony June 12. Boca Raton Scout Troop 336 presented the flags for the ceremony, and Exalted Ruler Vincent Como presided. After the ceremony, 20 members and the scouts and their parents stayed for a dinner. Pictured are the scouts presenting the flags, Como and Pat Maher, PDD, chaplain. 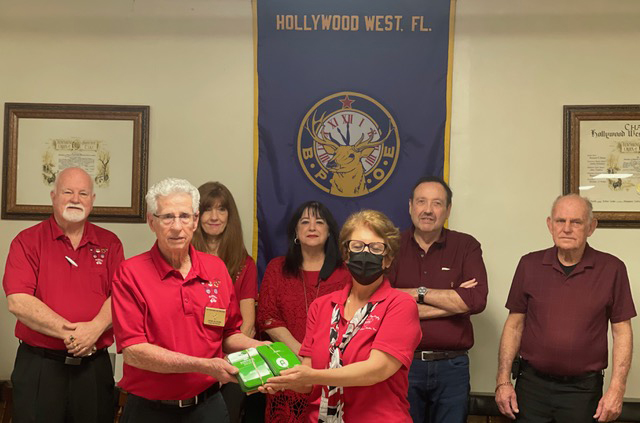 Boca Raton Elks Lodge #2166 was used as a polling place for the elections this year, and many members were trained to be poll workers. To thank the Elks for the use of the hall, the Palm Beach County Supervisor of Elections donated $1,980.00 to the lodge. Pictured are Tito Young, Exalted Ruler; Vic Weliky, member; Catherine MacDonald, member; Shirley Board, Loyal Knight; Judy Lamey, media relations specialist for the Palm Beach County Elections Office; and John DeCicco, trustee.

Delray Beach Elks Lodge #1770, using a donation of $500, donated 18,000 books to elementary schools in Delray Beach, Boca Raton, and Boynton Beach, Florida. On Dec. 5, the lodge donated $1,000 to the Palm Beach County Food Bank’s Empty Bowls fundraiser. On Dec. 14, the lodge donated $2,000 for the city of Delray’s holiday toy drive and to Heroes and Helpers. These projects fund Christmas presents for children and families in Delray Beach. On Dec. 15, the lodge sponsored ADVA’s (Aid to Victims of Domestic Violence) 21st annual Race for Hope with a donation of $500. The race took place Jan. 21. 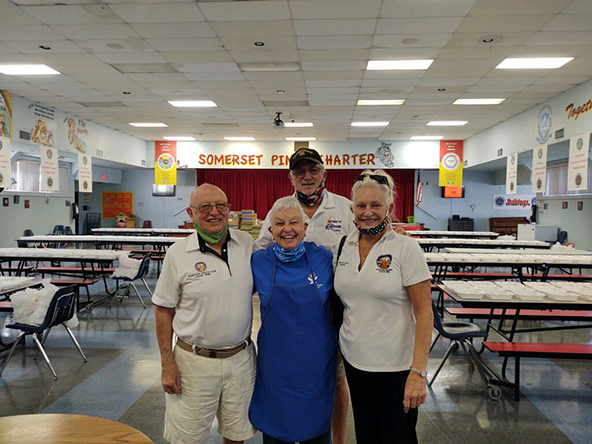 On Nov. 26, Pompano Beach Elks Lodge #1898 used $500 from its Elks National Foundation Beacon Grant to help St. Elizabeth of Hungary Catholic Church deliver meals to community members who are shut in and to provide a curbside service. In all, 400 meals were distributed on Thanksgiving. In addition, 50 families received baskets of food from the pantry. Pictured are Bud Legere, Exalted Ruler; Sandy Legere, trustee; Charlotte Burrie, PDD; and Frank Sellers, PDD (back). 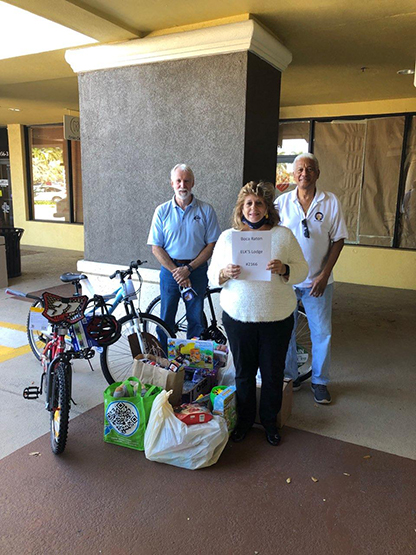 Boca Raton Elks Lodge members donated three bicycles, a scooter, a skateboard and over $400 worth of toys to the American Association of Caregiving Youth. This organization helps children who care for ill parents. In addition to these gifts, members donated another $936 in cash to help the organization supply needed items to these caregivers. Members also helped wrap and distribute the gifts to the children at the association’s gathering. Pictured are Ian MacDonald, PER; Shirley Board, Loyal Knight; and Tito Young, Exalted Ruler. 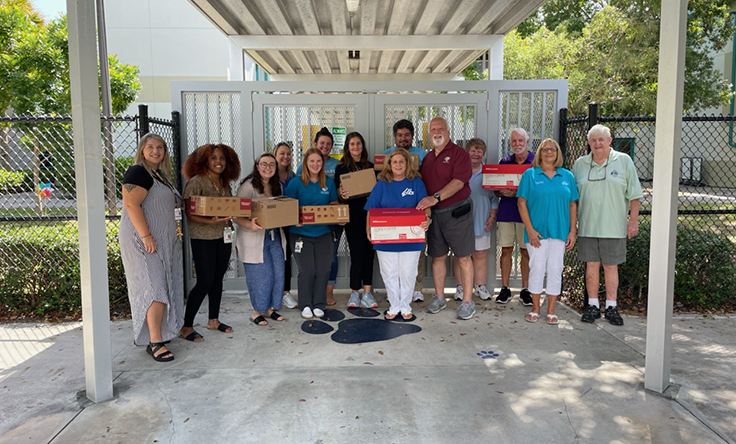 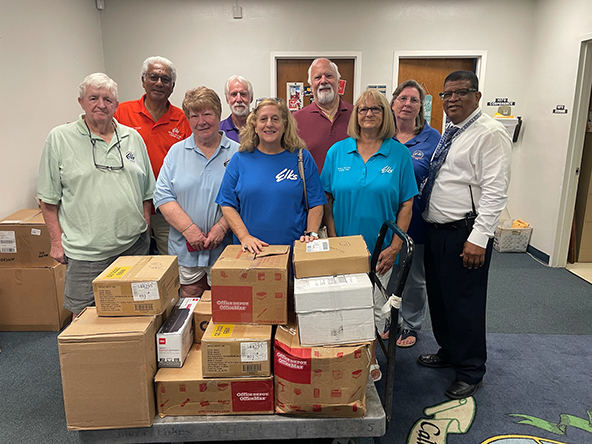 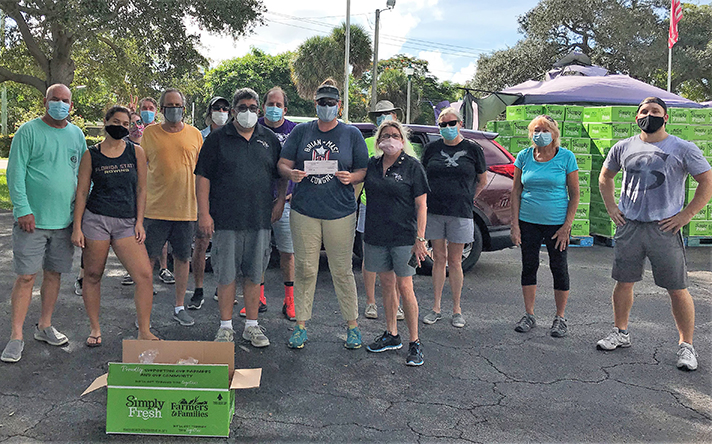 Delray Beach Lodge donated $1,750, half of its Elks National Foundation Beacon Grant, to Living Hungry, an organization that partners with other groups to help feed those who are hungry. Lodge member Maura Plante founded the organization and puts a large focus on feeding children. Living Hungry is based in Delray Beach, Florida, and has a warehouse in West Palm Beach, Florida. During the pandemic, they are providing 2,774 families in Delray Beach with 20 pounds of fresh produce, milk, cheese and meat every week. Living Hungry receives donated food boxes from the USDA Farmers to Families Food Boxes program but still is responsible for covering the expenses during the food distribution events such as forklift and pallet jack rentals, equipment, water, snacks and insurance; the lodge’s donation will help with these costs. Gregg Simpson, lodge member, and Becky Knapp, spouse of member Tim Knapp, packed cars with boxes twice a week for two months. Pictured Aug. 27 during a distribution event are Cecil Broderick, Exalted Ruler; Plante; and Carol Eaton, lodge treasurer, along with the many volunteers of the day.