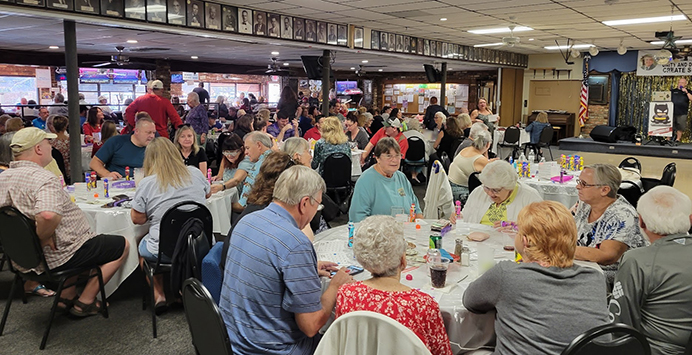 On the second Sunday every month, St. Petersburg Elks Lodge #1224 holds a Jukebox Mania music bingo event to benefit the Harry-Anna Trust Fund. The game is hosted by lodge member Martin Brinkley of Batman Media. The host has a screen set up to display 30-second music videos (with the name of the song and artist shown). Players’ bingo cards have song names instead of numbers and members sing along while daubing the songs on their bingo cards. On Jan. 8, the first game of 2023 was enjoyed by more than 80 players, who donate $5 to play three games, and $410 was raised. Prizes for each game are given as a $10 lodge gift card. 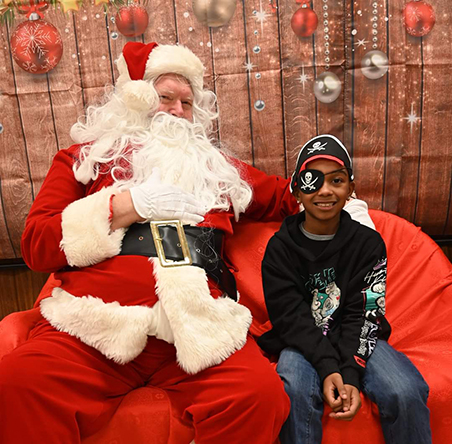 On Dec. 16, Tampa Elks Lodge #708 collected hundreds of toys from Walgreens collection boxes from the Walgreens-Elks Community Gift Drive. With the toys, they stocked a “store” during the lodge’s Christmas party for local children in need. Patty Volpe, Youth Activities Chair, maintains a database of families in need and had an impressive number of families, including some large foster families, respond with an RSVP. The children enjoyed a parade, played games and won prizes, had a photo visit with Santa, made pirate-themed crafts, and sang songs. They also enjoyed spaghetti, salad, applesauce and ice cream. Meanwhile, one adult from each family visited the staged store and “shopped” for presents for age-appropriate gifts for their children. Those presents were wrapped by volunteers for the Academy of the Holy Names Rowing Club, placed in a large black sack, and hustled out to the parking lot to be stowed in trunks. Each child received approximately five gifts. Some families even won a bike as part of a raffle. There were about 150 children and adults involved.

St. Petersburg Lodge #1224 held a toy drive-thru Dec. 17. Four hundred vehicles came through and 1,000 gifts were given out. 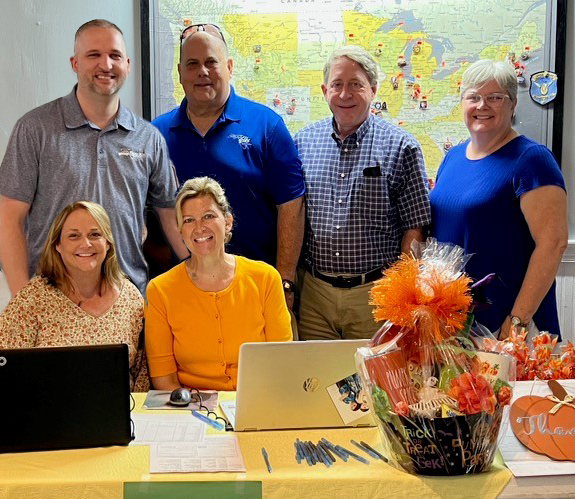 Holiday Isles Elks Lodge #1912 held a creative fundraising event to increase its number of Harry-Anna Trust Fund sustaining donors for the Florida Elks major projects. It was called “Fall for Harry-Anna” and was an anything-pumpkin cook-off. There were 14 dishes to taste and judge. Fall-themed baskets were and will be raffled off as different levels are reached. Four donors signed up during the event. Since the event, they have met the 25 donors goal and will raffle off a basket at the next orientation meeting. 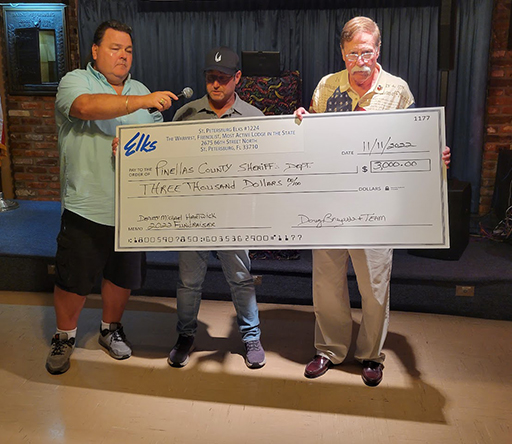 St. Petersburg Elks Lodge #1224 held a fundraiser Nov. 11 for the family of fallen Pinellas County Police Deputy Michael Hartwick, who was killed in the line of duty. The event raised $3,000. 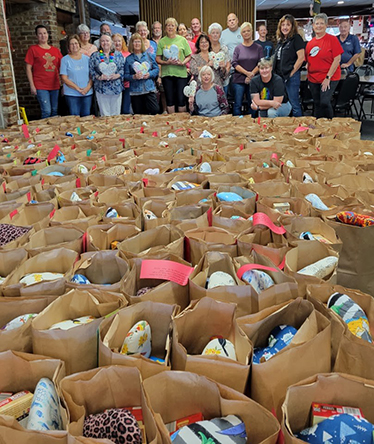 On Dec. 16, members of St. Petersburg Elks Lodge #1224 filled 332 Christmas food bags to help 1,328 adults and children in need for the holidays. Funds were used from the $2,500 Elks National Foundation Gratitude Grant and $2,500 of Florida State Elks Association matching Beacon Grant funds. The total value of the bags was $9,420. Heidi Green, Leading Knight, organized the event.

Members are pictured with the bags. 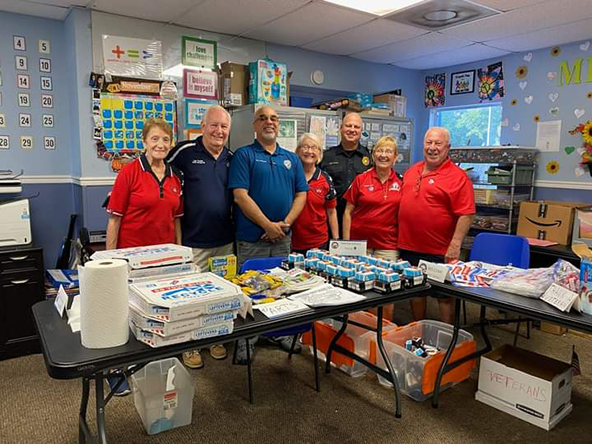 On Nov. 28, Tarpon Springs Elks Lodge #1719 used its $6,000 Elks National Foundation Beacon Grant to support the Tarpon Springs Cops ‘n Kids program with a fun day at the youth center, put on by 20 Elks volunteers. The program is a free after-school program committed to empowering children and teens for lifelong success and greater quality of life. Officer Quinones of the Tarpon Springs Police Department is the program director. At the event, each child was given a personal hygiene kit and a lunchbox to fill with healthy snacks and drinks. The children made thank-you cards for veterans, worked on arts and crafts, and enjoyed pizza. Chief Young from the Tarpon Springs Police Department was also at the event. Bob Gorby, PER presented Officer Quinones an Elks appreciation award and two checks — one for $1,500 for the program for children with special needs and one for $1,500 for sports equipment needed at the center. 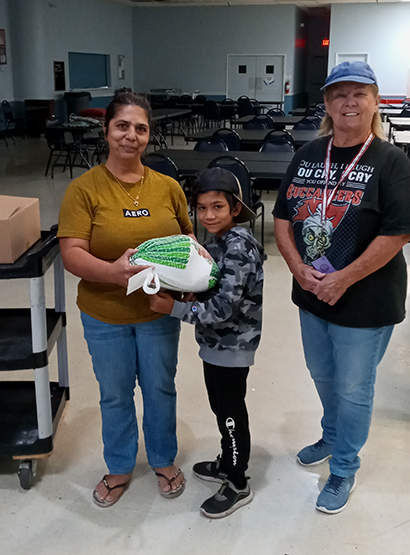 New Port Richey Lodge donated 45 food boxes and turkeys to residents in need in the community a few days prior to Thanksgiving. The food was from the lodge food pantry, which is stocked using funds from the Elks National Foundation Beacon and Gratitude grants. Each box was valued at approximately $50.The boxes were assembled by Rebecca Soto, grant chair, and her membership team. This is an annual project for the lodge.

Pictured are recipients Sarah and Avdo Thompson and Rebecca Soto.

New Port Richey Lodge members donated more than six pickup truckloads of personal care items, cleaning supplies and other emergency necessities to aid those who were severely affected by Hurricane Ian in southwest Florida. A local roofing company made the delivery with its vehicles in early October, soon after the hurricane hit. The roofing company got involved because it will be putting a new roof on the lodge. 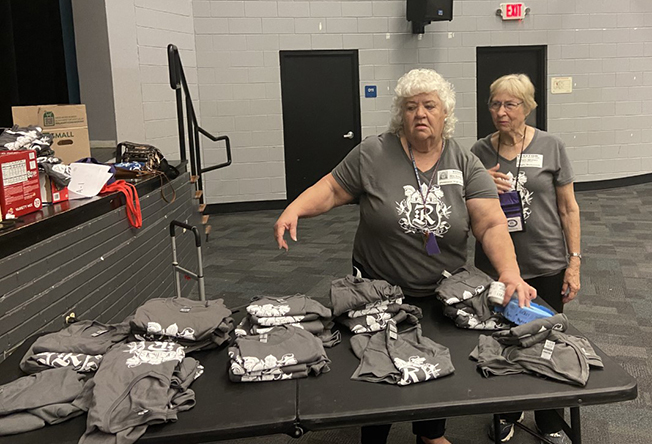 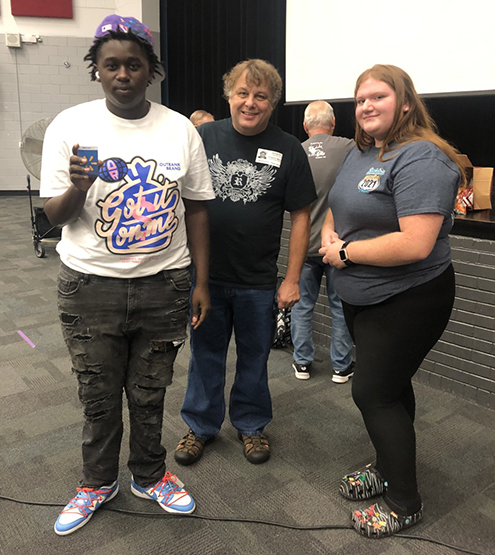 On Oct. 24, Tampa Elks Lodge #708 held its monthly Club Chivalry meeting for students at Robinson High School. There were 33 club members present. Lodge members provided students with T-shirts at no cost to them. The Elks used lodge funds and funds from the Elks National Foundation Beacon Grant. Lodge member Robert Maloney Jr. was a guest speaker and spoke about his 43 years as a nurse. At these meetings, the student officers make most of the plans, while the Elks handle refreshments, raffles and any needed support.

Details
Written by Marilee Mills, PER

Pictured are Marilee Mills, PER, Exalted Ruler, and Margaret Smith, Loyal Knight, at the school.