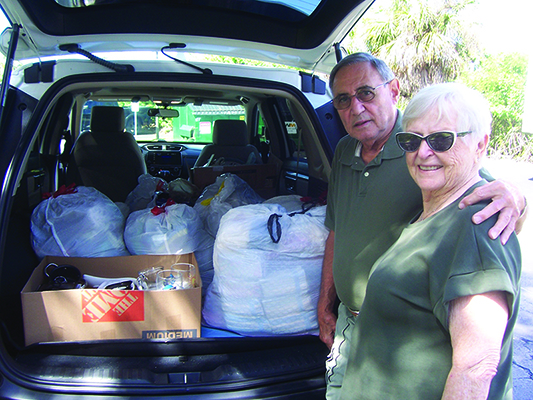 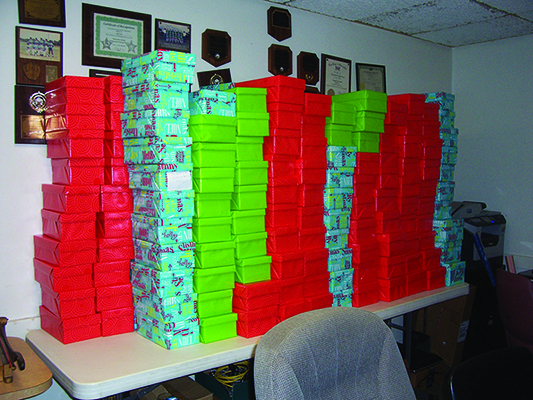 Paul Colicci Jr., Englewood Elks Lodge #2378 Veterans Committee Chair, and member Joyce Sousa have been busy since the beginning of the year rounding up and delivering donations for veterans. To date, Colicci and Sousa have collected and delivered 73 crocheted blankets, 37 bags of clothing, five boxes of personal items, three boxes of kitchen items, one small appliance and a grill to the Port Charlotte Florida Homeless Coalition to assist individuals and families in need of food and shelter. They have also been collecting shoeboxes for the lodge’s adopt-a-box veterans program. The shoeboxes are all wrapped, mostly by Sousa, and are ready to be “adopted” by lodge members and friends of the Elks and filled with supplies of their choosing for veterans with items such as shampoos, conditioners, razors, soaps, lotions, socks, candies, books, magazines, cards and any small personal items the veterans might enjoy having.

Pictured by a car full of donations are Paul Colicci Jr. and Joyce Sousa. Also pictured are all the shoeboxes wrapped by Sousa. 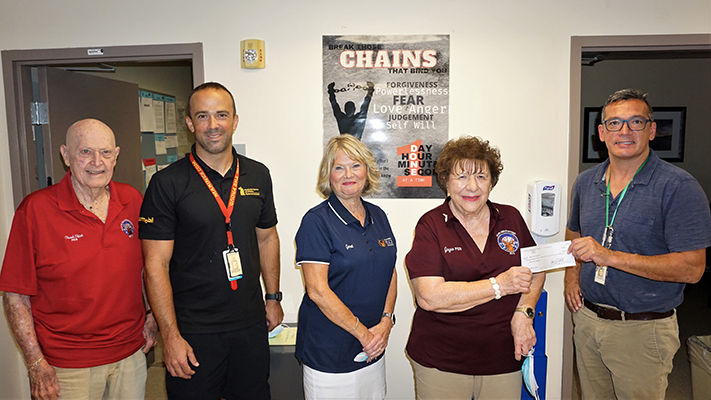 On Sept. 9, South Hillsborough Lodge donated $3000 plus $3,000 worth of supplies necessary to set up housekeeping for veterans leaving the James A. Haley VA Hospital domiciliary for their new apartments. This donation was made possible by the Elks National Foundation Beacon Grant. 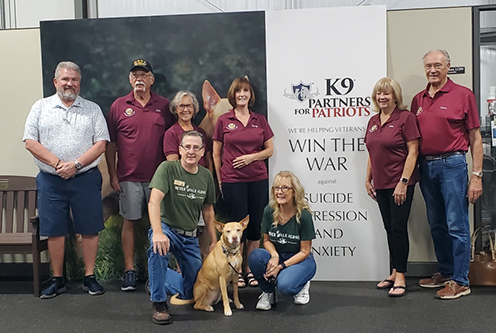 On Sept. 9, Brooksville Elks Lodge began hosting monthly dinners to honor veterans in assisted living facilities. The lodge invited six veterans from Brookdale Senior Living to their dinner dance. The veterans were honored and received thanks from the lodge members for their service.

Viera Elks Lodge #2817 continued its support of local veterans by providing furniture to seven veterans (two in July, one in August and two in September) who are transitioning to permanent housing. The program is VOA/SSVF (Volunteers of America/Supportive Services for Veterans Families) Transitional Housing Program. The lodge used $750 of the lodge’s Elks National Foundation Focus Grant. In addition, $1,750 from the grant was donated to the VOA to assist veterans with rent and/or utility payments. Another $750 from the grant was used to purchase five twin bed mattresses for the veterans’ housing units. The lodge also purchased 15 small microwaves for $1,100 (approximately $73 each) and 30 stick vacuums for $1,100.0 (approximately $36 each) with funds from the Elks National Foundation Spotlight Grant. These were also donated to the veterans’ housing units. 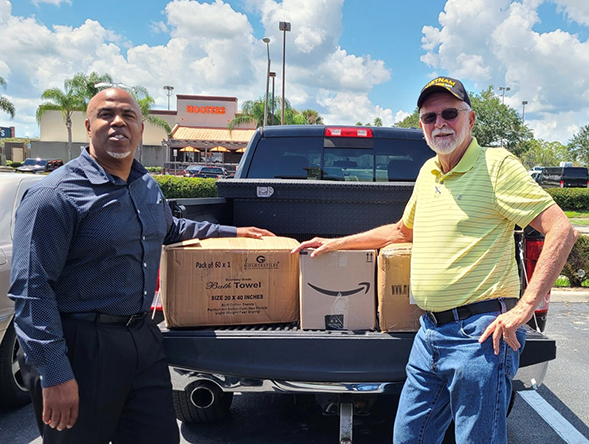 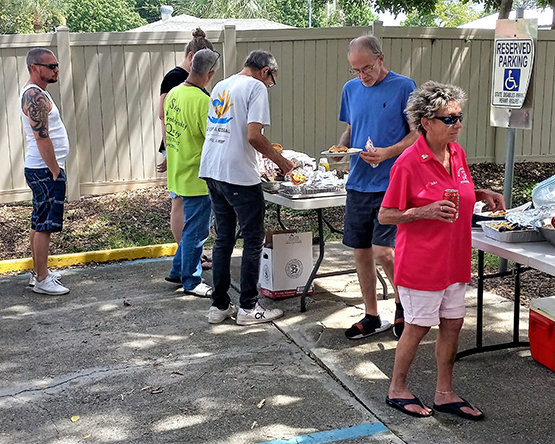 On July 30, Manasota Elks Lodge #2734 held its annual picnic at Veterans Village in Bradenton, Florida. Lodge members prepared and donated the side dishes and the lodge’s Veterans Committee donated the funds to purchase the meat, buns and condiments for a total of 35 residents and staff members, who were very appreciative. The remaining food was left with them to enjoy later. Veterans Village is a community where Manatee GPD (Grand Per Diem program) provides clinical treatment, transitional housing and case management services to veterans experiencing homelessness. Manasota Lodge has been very active with the community for the last five years in various capacities such as picnics, holiday dinners and Welcome Home kits.

Pictured in front is Spike Klocke, lodge grant coordinator, with veterans at the buffet tables. 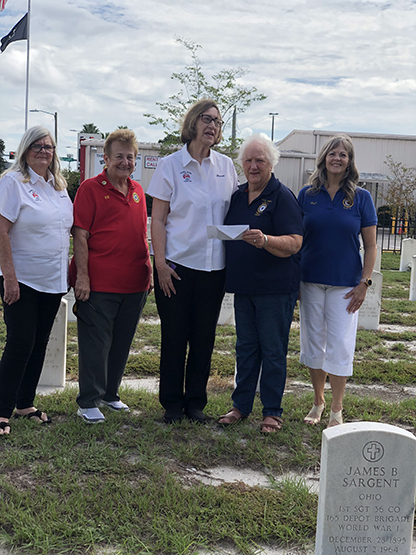 On Aug. 30, Tampa Elks Lodge #708 donated $500 to the American Legion Post 5 Cemetery Corporation to sponsor wreaths for the Wreaths Across America program, one of the largest simultaneous events in the country. On Dec. 17 at every veterans cemetery in the United States, from well-known ones like Arlington National Cemetery to this small one with 730 graves in Tampa, Florida, a brief ceremony will be held and volunteers will place wreaths on each grave while saying the name of the deceased veteran aloud. Their mission is to spread the important message of remembering our fallen heroes, honoring those who serve, and teaching children about the sacrifices made by veterans and their families to preserve our freedoms. The funds to provide the wreaths were part of the lodge’s charity fund budget for the year. 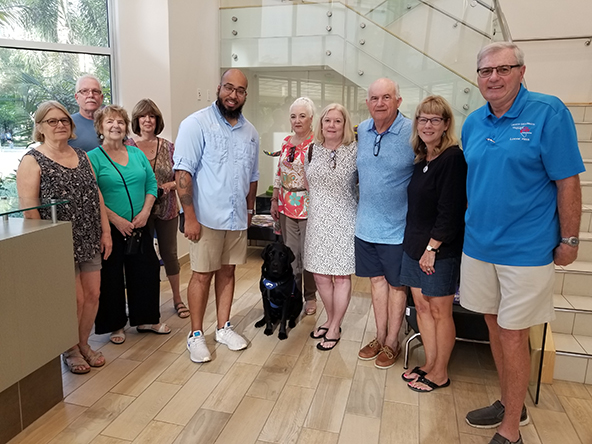 On Aug. 31, Lakewood Ranch-Sarasota Elks Lodge #2855 donated $5,000 to Southeastern Guide Dogs to sponsor training dogs for veterans in need of a service dog. The dogs make a dramatic difference in the veterans’ lives. The funds were raised during a dinner and comedy show held at the lodge.

Tom Sweeney, Lodge Veterans Committee Chair, right, presented the check to Sean Brown and his service dog, Nick, center. Also pictured are Elks members who were given a tour of the facility.

Each month, Ann Smith, Fort Pierce Elks Lodge #1520 Leading Knight, mails packages of gifts and snacks to American military members overseas. The items she sends come from lodge members and lodge funds. On special holidays, she asks members to sign cards and includes them in the packages to brighten their holiday.

Fort Pierce Lodge member Rod Dally, PER, a 53-year Elk and Purple Heart recipient, and his wife, Beverly, also a lodge member, deliver gifts, snacks, lap robes and hygiene kits every month to the VA hospital in West Palm Beach, Florida, for the patients and veterans who are experiencing homelessness. The VA hospital recently requested some can openers, so using lodge funds and member donations, Dally purchased them and delivered them on his monthly trip. Dally also made contact with the coordinator at the new VA hospital in Tradition in St. Lucie County, where lodge members will be helping them. He anticipates lodge members going to visit with the patients and brightening their day.

Each first Wednesday of the month, Fort Pierce Lodge donates proceeds from one of its bar games to the lodge veterans account. These funds are used for projects such as the packages sent overseas for military members and items purchased for the West Palm Beach VA Hospital. 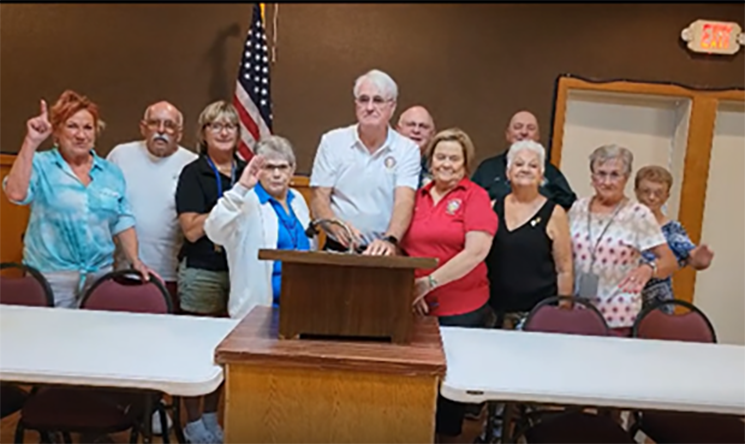 Fort Pierce Lodge members recently recorded a video for the Re-Creation video project, which will send recorded messages of thanks to veterans in veterans’ homes and hospitals nationwide. 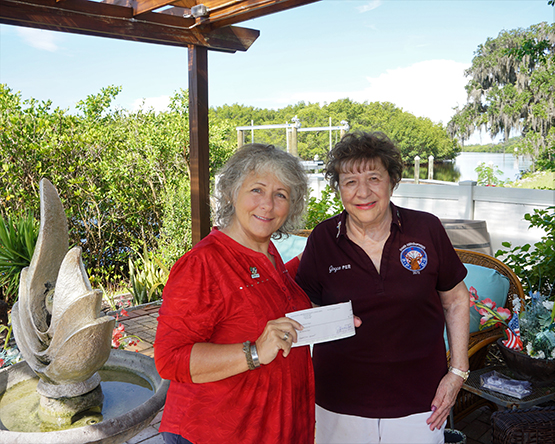 On July 1, South Hillsborough Elks Lodge #2672 donated $1,000 from its Elks National Veterans Service Commission Freedom Grant to My Warrior’s Place in Ruskin, Florida. My Warrior’s Place is a retreat center for veterans; military service members; law enforcement officers; firefighters; and Gold Star, Blue Star, and Silver Star families. The organization also offers several programs for those who have put their lives on the line for others’ safety and well-being, endured the death of a fallen warrior, or experienced the horrors of war. Each program plays an important role in the healing and coping process. The lodge’s donation will be used to temporarily compensate for a veteran experiencing homelessness to stay in one of the cottages.

Pictured are Kelly Kowal, founder and director of My Warrior’s Place, and Joyce Dominick Schaefer, PER, lodge grant coordinator. 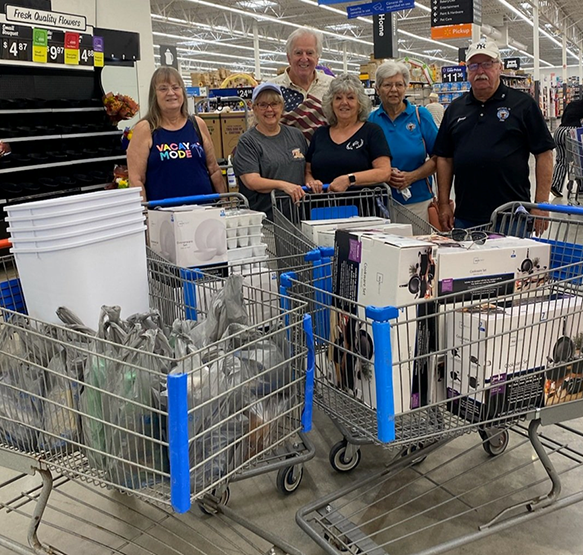 On Aug. 18, a group from Ocala Elks Lodge #286 split into two teams and went shopping at two Walmart stores for items to make welcome home kits for veterans in the community. The initiative was funded by an Elks National Foundation Spotlight Grant. The lodge will partner with Volunteers of America, HUD-Veterans Affairs Supportive Housing social workers and other community partners to reach the intended audience. Lodge members will use the items purchased to make basic welcome home kits and work with each veteran on a case-by-case basis depending on the individual's circumstance. The welcome home kits will allow the lodge to address a pressing need in their community, which is assisting homeless veterans to settle into their new home. This allows them to become self-sufficient, have pride in their new home and ultimately leads to increasing their self-esteem.