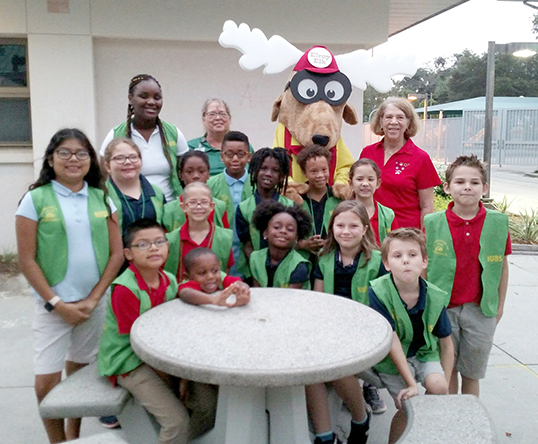 Diane Davis, Manasota Elks Lodge #2734 Drug Awareness Chair, and Dawn Markham, aka Elroy the Elk from Lakewood Ranch-Sarasota Elks Lodge #2855, greeted students each morning or at lunchtime at eight elementary schools in Manasota County during the 2019 Red Ribbon Week in October. The students loved Elroy’s visit and received many hugs! There were 5,000 red ribbons distributed to all staff members in the Manatee County schools as well as to the school bus drivers to wear during Red Ribbon Week. The schools held various activities during Red Ribbon Week to promote the 2019 theme of Send a Message - Stay Drug Free! Pictured with students at Oneco Elementary School are Marie Mueller and Diane Davis of Manasota Lodge. Elroy is played by Dawn Markham of Lakewood Ranch-Sarasota Lodge. 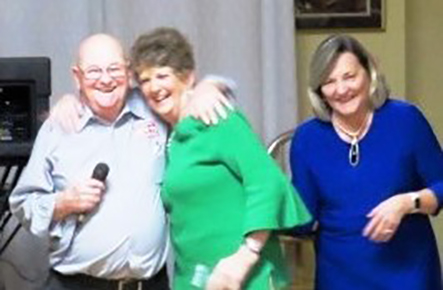 Sarasota South Elks Lodge #2495 treated the volunteers of the Toys for Tots program to a dinner Jan. 22. There were volunteers from the lodge as well as from Venice-Nokomis Elks Lodge #1854, VFW Post 3233, and the volunteers from Charlotte County. Jim Lamb, PDD from Sarasota South Lodge has been the coordinator for the Marine Corp Toys for Tots for Sarasota County since 2009. This year he was also responsible for Charlotte County. A total of 153,031 toys, 5,016 books and 8,755 Christmas stocking stuffers were passed out to families from the two counties totaling $2,937,258.86. During the campaign there were 68 Elks and 39 non-Elks who worked on the project for a total of $431,678.65 in-kind dollars that were given back to the community. Pictured are Jim Lamb, PDD; Ruth Rankin and Liz Watson. 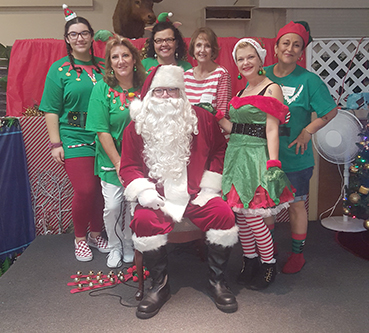 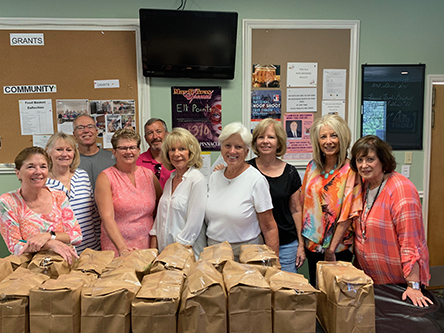 On Nov. 12 and Dec. 9, Venice-Nokomis Elks Lodge #1854 packed 80 food baskets for Thanksgiving dinners and 80 for Christmas dinners and were delivered to a local elementary school and dropped off to the guidance counselors to protect the privacy of the recipients in need. The lodge also provided 31 families with toys for Christmas. Again, the guidance counselors were of help providing the lodge with a list of first names and ages of children. All this was accomplished using their Elks National Foundation Beacon Grant.

Lakewood Ranch-Sarasota Lodge Hosts Cocktails for a Cause 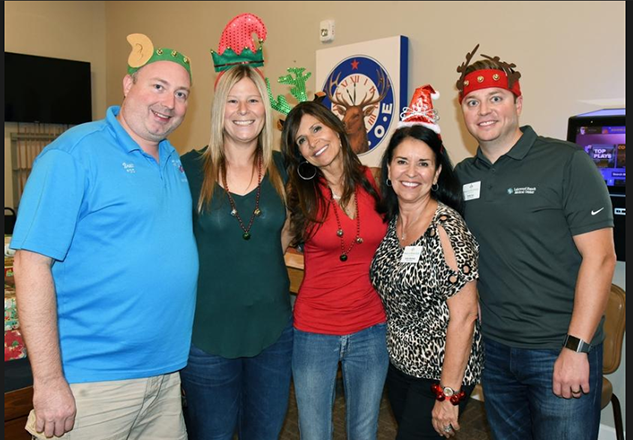 On Nov. 8, hundreds gathered at Lakewood Ranch-Sarasota Elks Lodge #2855 to celebrate Cocktails for a Cause. The event, benefiting the 14th annual Community Shoe Box Drive and Reception, had guest bartenders competing for tips, a holiday inspired raffle and lots of wrapped boxes ready to be filled. “We started collecting shoeboxes in 2006 to help needy seniors,” said Meals on Wheels PLUS of Manatee CEO, Maribeth Phillips. “Gifts of toiletries, trinkets, and small necessities will be packed in a decorated shoebox and delivered to home-bound seniors through our organization.” The event raised $1,570. 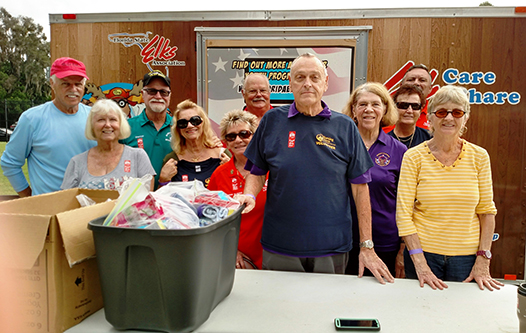 On Nov. 2, Manasota Elks Lodge #2734 used their $2,000 Elks National Foundation Spotlight Grant to support the Manatee County 2019 Stand Down held at the Manatee County Fairgrounds. This is the third year Manasota Lodge has supported this event using an Elks National Foundation grant. The lodge also takes the district drug awareness trailer and distributes red ribbons and drug awareness brochures. Bradenton and Lakewood Ranch-Sarasota lodges also used their Spotlight Grants to support the Stand Down. Members from these lodges handed out toiletries to the 225 registered attendees as well as to some who didn’t register. Of those registered, 120 veterans and 29 of them were homeless veterans. There were 138 attendees who accessed the health services available. Forty-two were given amnesty on legal counts against them, 11 convictions were set aside, and $23,582.37 of fines and fees were set aside.

A week after Hurricane Dorian hit, Lakewood Ranch-Sarasota Elks Lodge #2855 teamed up with Agape Pilots, a group of volunteer pilots who ferry supplies to various islands in the Caribbean, to take supplies to the Bahamas. This effort was spearheaded by member Sarah Davis, and the response garnered such supplies as brooms, mops, buckets and paper goods. 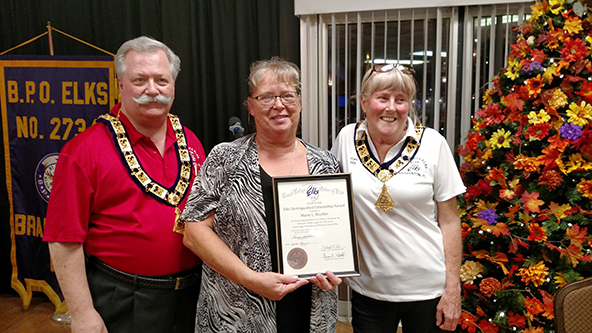 On Sept. 18, Craig Abbott, PER of Manasota Elks Lodge #2734 presented Marie Mueller, N.U.B.S. community service co-advisor of Oneco Elementary School, the Elks distinguished citizenship award for her outstanding leadership and dedication to N.U.B.S. (Never Underestimate Brave Students), a community service group of students who volunteer their time to help their school, community and country. The lodge has been supporting the program since the 2014-2015 school year. Years ago, lodge member Pat Gallagher went to Marie Mueller with his vision and she and the students jumped right on the idea. As they were too young to join the Antlers junior Elks program, they put on their thinking caps and started their research. They soon learned that antlers start from a pair of nubs on a buck’s head. This was it – the group had a name and their amazing journey began. Their mission statement is, “Be the change you wish to see in the world.”

Manasota Lodge supports N.U.B.S. throughout the school year. They donated vests for each member to wear during their activities, they donated to rebuild their vegetable garden, they promote the Red Ribbon poster contest, they collect and donate box tops for their playground equipment, they sponsor breakfast with Santa, they read at the school on Literacy Day, and they donated 528 pencils to their school supplies. 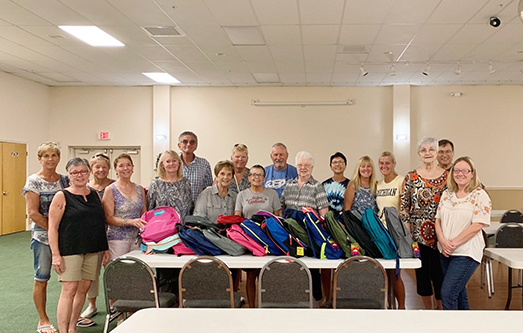 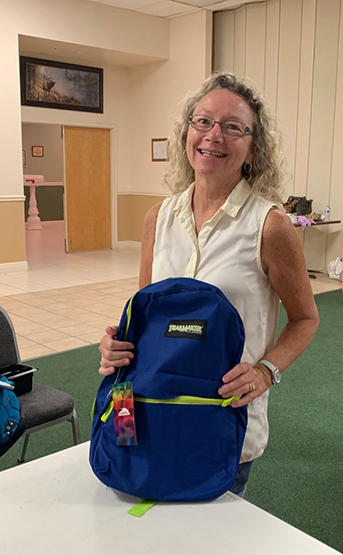 On Aug. 1st, members of Venice-Nokomis Elks Lodge #1854 prepared 50 backpacks filled with school supplies for children in need from local schools and the community center. The supplies were donated by members and using a portion of their Elks National Foundation Gratitude Grant.

Palmetto Elks Lodge #2449 has been providing community service to children in the local (soon to be statewide) Dive into Reading program. The program is designed to help children in Title I schools from first through third grade raise their reading skills. Sadly, 51% of Manatee County, Fla., children in the third grade cannot read at the third-grade level. These statistics are similar throughout the south Florida Title I school system.

The Anna Maria Oyster Bar piloted this program after they heard the statistics above from school employees and realized that from birth to third grade, we learn to read, and from third grade on, we read to learn. Children who cannot read at grade level after third grade usually do not make it through high school.

In its third year, Dive into Reading has proven to be successful at raising the reading levels of children who participate. The local school system brings children to the restaurant for breakfast with a mentor. The mentors assist the children by reading with and to them from grade level books and having the children read back from the same book. The program runs for one month in June. Children are tested by the school system at the end of the school year and then again at the beginning of the next school year. After attending the program, the results show positive improvement, or at least no loss of reading skills throughout the summer months. Statistically, these children would normally lose up to three months of reading skills during summer break.

Palmetto Elks involvement started at the mentor level. In the second year, the lodge donated over 200 backpacks with school supplies to the attending children. This year, over 400 children attended. The program is growing and other local restaurants are now participating. The Sarasota County school system has also joined the program. Palmetto Lodge has committed to providing an adequate number of backpacks for the program. The lodge is working with other lodges in the district to expand participation. 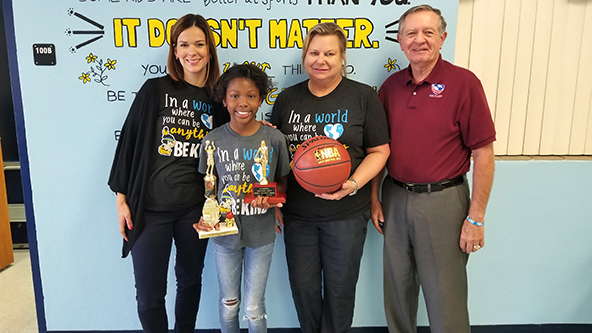 On March 9, South Hillsborough Elks Lodge #2672 used their Elks National Foundation Promise Grant to host a prom for students with special needs at the lodge. The students were from Earl L. Lennard High School in Ruskin, Fla. Pizza, wings, cupcakes and soft drinks were served. Over 30 students danced all evening to a DJ with the principal, teachers, family and Elks all joining in the fun.