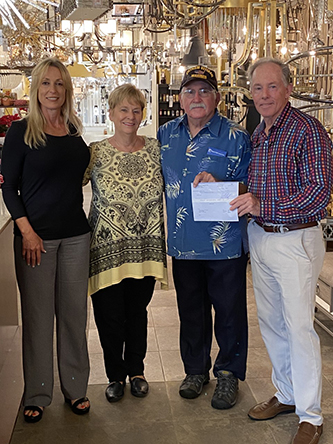 Miami Elks Lodge #948 adopted six families in need in the Miami area this holiday season and treated them to a Christmas party at the lodge Dec. 14 as part of a Neighbors Helping Neighbors campaign. Along with the lodge’s $1,500 set aside for this event, additional funds were received from South Dade Lighting, a showroom in Miami. On Dec. 2, they donated $2,600 to the lodge after a member informed them of all the charitable things the Elks do for children and veterans. Many times, lodge members give donations of money or food if the lodge doesn’t have enough money, but that wasn’t necessary this year thanks to this gift. The business collected money from customers by giving them a discount and they let them know that this extra discount would be given to the Elks. The lodge gave the children in each family presents and the families received Publix gift cards. Frankie’s Pizza owned by lodge members donated pizzas at half price for the party. Members made brownies and bought Christmas cookies. The invited families were suggested by Dade County social workers who deemed them the most needy. In the past, the lodge had a Christmas party for members’ children, but they made the decision to host this party for these families instead who otherwise would not have had a Christmas.