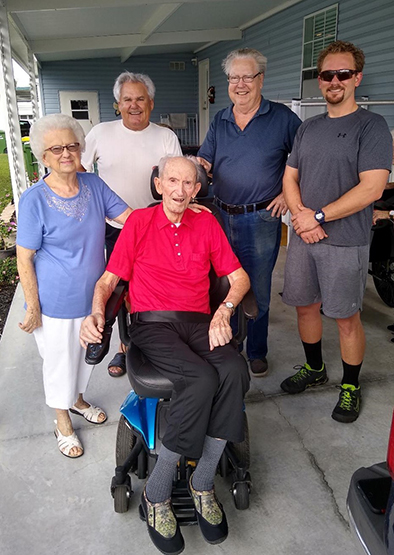 Bradenton Elks Lodge #1511 donated a new wheelchair to World War II veteran Joe Hennessy after neighbor Joel Radovich contacted the lodge for assistance. The 96-year-old veteran was a member of the 101st Airborne Division and was wounded at the Battle of the Bulge. He and his wife, June, have been married 71 years. When expressing his gratitude, Hennessy said, "Now I'll be able to take my wife out to dinner." The wheelchair was purchased with funds from two sources – a Southwest District Veterans Grant (the district created a $300 grant for each of its seven lodges from the district veterans’ fund to assist them in their veterans’ efforts) and the lodge’s veterans’ star program which is part of the lodge’s Veterans Committee. Members purchase a paper star for $20 for a drawing in which half the proceeds go to the member whose ticket is drawn and the other half funds the Veterans Committee programs. Pictured Feb. 20 with Hennessy are June Hennessy; Bill Rauh, Lodge Veterans Chair; Jack Cantwell, PER; and Radovich.