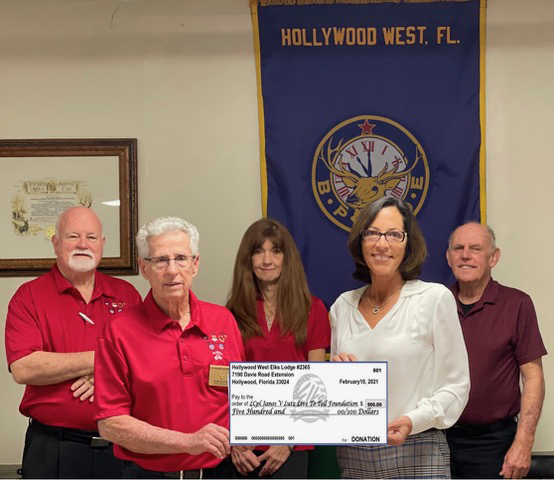 On March 15, Sarasota South Lodge donated $1,500 of food to Harvest House to feed veterans experiencing homelessness. The monies were from the Elks National Foundation Beacon Grant and matching funds from the Florida State Elks Association. Harvest House was created in 2010. Their VETS program assists male veterans who have struggled with emotional trauma and substance abuse after their service by offering housing set in a therapeutic community, recovery and life-skills classes, and case management services. 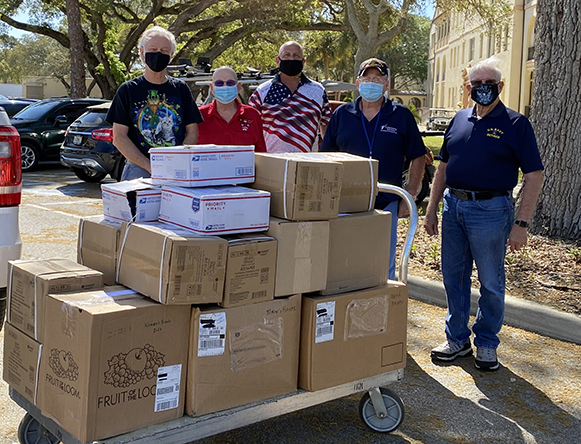 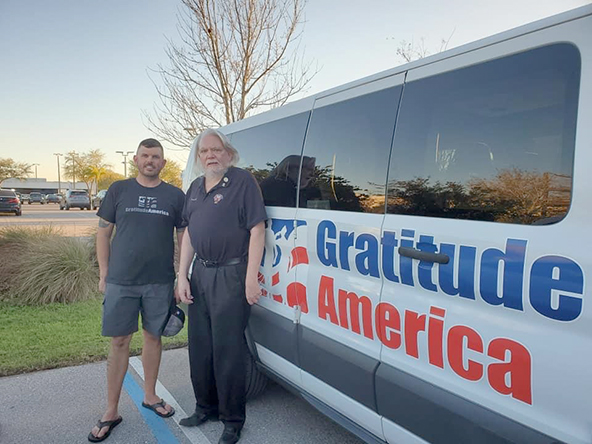 On March 4th, Sarasota South Elks Lodge #2495 hosted Gratitude America, a Florida-based nonprofit organization founded in 2011. As explained on their website at gratitudeamerica.org, “GratitudeAmerica’s mission is to provide critical support for service members, veterans and their families by conducting meaningful restorative programs to assist veterans affected by deployment exposures such as traumatic brain injury and combat-related stress. GratitudeAmerica Military Support Retreats are a breakthrough, no cost, 4-day immersive and intensive experience designed to help combat Veterans and their supporters make peace with their past so they can begin planning for their new mission at home.”

Using its $2,000 Elks National Foundation Gratitude Grant to fund a portion of this four-day retreat, the lodge hosted 24 veterans and their spouses and support persons as well as GratitudeAmerica staff  at the lodge for a meal prepared and served by lodge members. 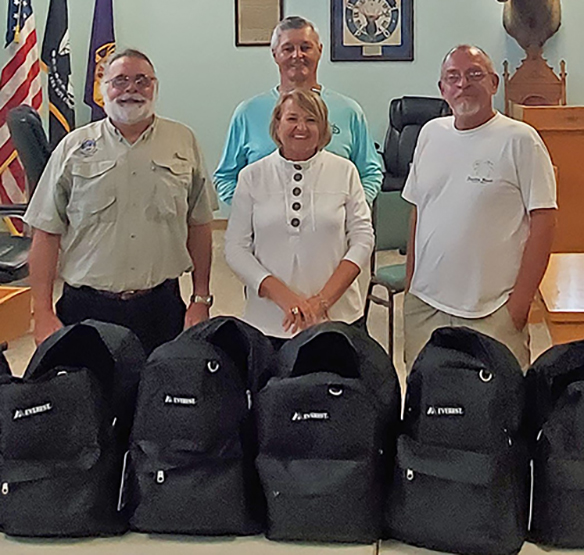 Deep Creek Elks Lodge #2763 used its $2,500 Elks National Foundation Freedom Grant to provide cleaning supplies, personal hygiene items, and new sheets and towels for the residents of Veterans’ Village in Punta Gorda, Florida. Each of the residents also received a $50 Walmart gift card to purchase needed clothing items. The resident manager was given $100 in quarters to be used by the residents to do their laundry, since the facility has coin-operated washers and dryers. There are currently 23 veterans (19 men and 4 women) living at the facility, which serves as a halfway house for veterans experiencing homelessness. There are 12 apartments in the facility, each shared by two people. The veterans pay rent during their stay, and the goal is to get them rehomed into the community. This project was completed during March by Kay Neilley, lodge treasurer, and Carol Aitchison, Lecturing Knight.

Brandon Elks Donate to James A. Haley Veterans' Hospital and Recruit a Member! 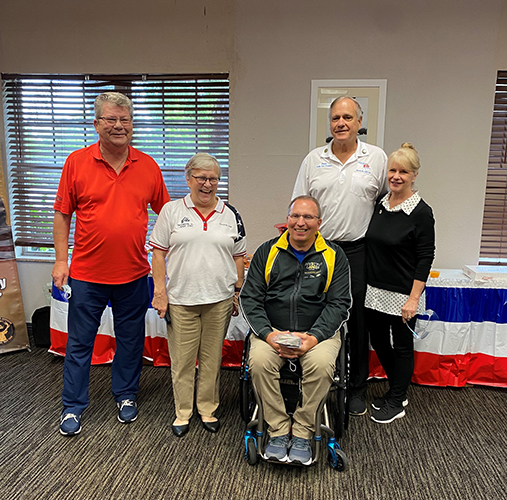 Brandon Lodge has a long-standing partnership with James A. Haley Veterans’ Hospital. For many years, Brandon Elks have visited veterans for holidays, invited veterans to dinners and hosted veterans at picnics. On March 6, Robin Rutzke, Lodge Veterans Chair, invited Geoff Hopkins, M.Ed., Chief of Recreation Therapy at James A. Haley Veterans’ Hospital, to join the Southwest Central District’s Florida Elks during the visitation of State President, Rudy Masi Sr., and his wife, Dolly Masi, PER. Rutzke asked President Masi to present their contribution to Hopkins, made possible by Brandon Lodge’s Elks National Foundation Freedom Grant — $750 in Olive Garden gift cards and a check for $300. Olive Garden works with the veterans’ hospital to meet the veterans’ dietary restrictions. Hopkins said the $300 donation will be put to good use supporting their annual picnic for their long-term patients. This year, due to the pandemic, the picnic will be held at the hospital, but it is hoped that next year’s picnic can again be held and hosted by Brandon Lodge. Hopkins shared that he has fond memories of visiting the Elks lodge with his father when he was a child, so President Masi invited him to join and is sponsoring his membership with Zephyrhills Elks Lodge #2731. Several Brandon Lodge members will attend his installation. 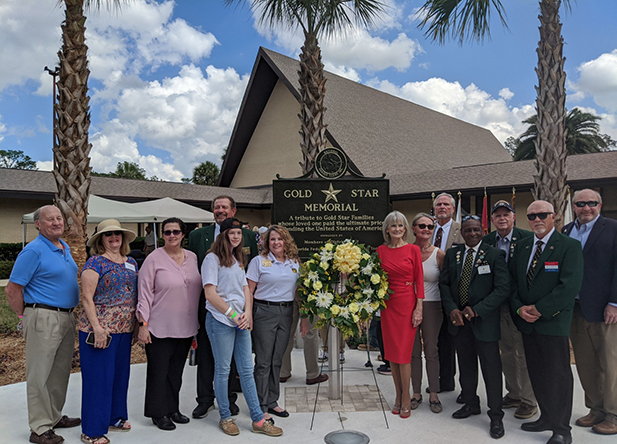 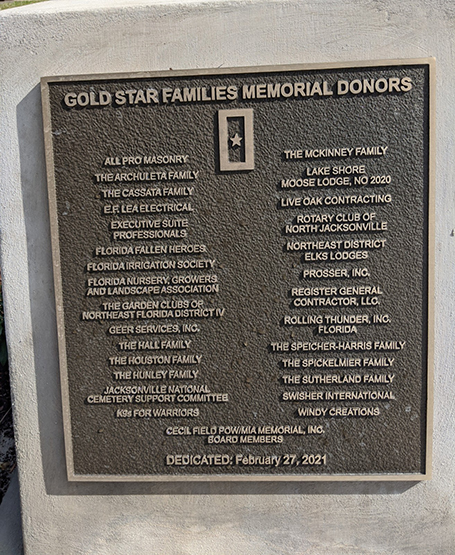 On Feb. 27, the six lodges of the Northeast District — Gainesville #990, Green Cove Springs #1892, Jacksonville #221, Mandarin-St. Johns #2866, Orange Park #2605 and St. Augustine #829 — joined together to donate a flagpole to the newest Gold Star Memorial located at Cecil Field in Jacksonville, Florida. This is the fifth Gold Star Memorial in the state with 76 memorials across the country. This memorial, organized by the Florida Federation of Garden Clubs, honors the sacrifice of veterans killed in action, missing in action or listed as prisoners of war. The plaque, bench, garden and flagpole are dedicated to Gold Star families, and the ceremony included moving speeches by several Gold Star family members and members of the military. 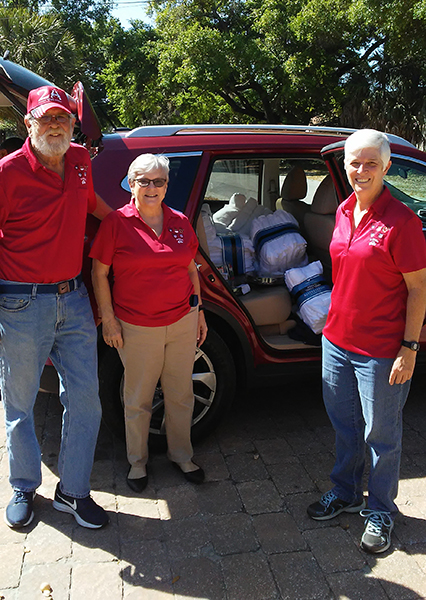 While it continues to be a challenge to support and interact with veterans during the pandemic’s health restrictions, Brandon Lodge’s Veterans Chair, Robin Rutzke, who is retired from the U.S. Air Force, continues to come up with creative ways to put their Elks National Foundation Spotlight Grant to good use. On March 17, Rutzke along with Glenn Garvey, lodge member and veteran, and Sharon Hammersla, lodge member and Southwest Central District Vice President, visited Liberty Manor for Veterans in Tampa, Florida, with a plethora of goodwill and gifts. The lodge provided a picnic lunch of fried chicken, deli sandwiches, baked beans and a St. Patrick’s Day dessert. In addition, all picnic supplies were supplied including plates, plastic utensils, paper towels, cups and disinfecting wipes. The Veterans also enjoyed and appreciated the visit.

The lodge also provided Liberty Manor $700 in Walmart gift cards. The lodge hosts a monthly dinner for the veterans, but because of the continuing pandemic, the veterans are not able to attend. Connie Lindsay, founder and CEO of Liberty Manor, said the gift cards will be put to good use to purchase dinners for the veterans as needed. One veteran even put in his request for pizza for one of their movie nights. Additionally, the veterans were gifted an abundance of household items for the kitchen as well as bath towel sets. Rutzke said it’s the little things that are really appreciated by veterans and that it was touching to watch each veteran’s appreciation as they picked out their towel set. A lodge member made an anonymous donation of a case of cat food and a container of treats because one of the resident veterans, while struggling with cancer, has adopted a stray cat, which the house has adopted. This veteran was brought close to tears at the thoughtfulness of this gesture. Hammersla said that “our hearts were full.”

A total of $1,364 from the Spotlight Grant was used. While Elks don’t do this for recognition, CEO Lindsay did present the lodge with a certificate of appreciation. Pictured are Garvey, Hammersla and Rutzke with a vehicle full of gifts.

On March 6, Fort Myers Elks Lodge #1288 held a chili cook-off fundraiser to benefit the Florida Elks’ Army of Hope. The contest raised $580. The membership voted at the March 17 meeting to add $520 from the charity account to the profits from the cook-off, and the Ladies of Elks contributed $500, making the total donation to the Army of Hope $1,600. This fund allows the Florida Elks to provide assistance to the families of military members in the state. 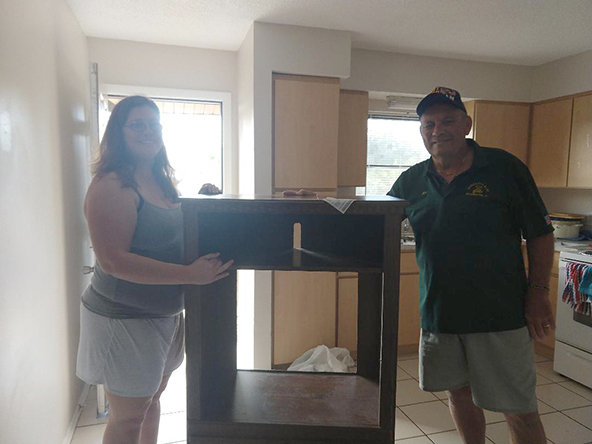 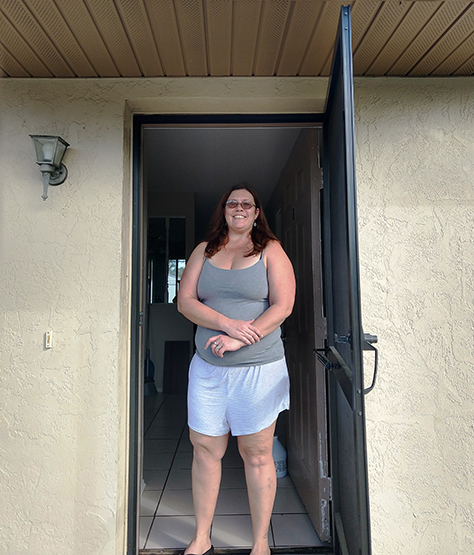 Manasota Lodge provided its first Welcome Home veteran’s kit to a veteran transitioning from Manatee Veterans Village into her own apartment. The kits are a program of the Elks National Veterans Service Commission which reimburses lodges up to $300 (or up to $500 if it includes a bed). This veteran provided the lodge with her wish list which consisted of a shower liner and rings, large trash can with liners, laundry basket, desk, bookcase, accent rugs, end tables, and TV stand. Three years ago, the lodge started working with Manatee Veterans Village. Part of their program provides a transitional housing service for veterans who are experiencing homelessness. Jim Klocke, Lodge Veterans Chair, viewed the Welcome Home kit program as another excellent opportunity to assist the village residents. Pictured Feb. 18 at the kit delivery are the veteran in her new home (name unreleased by lodge) and Klocke. 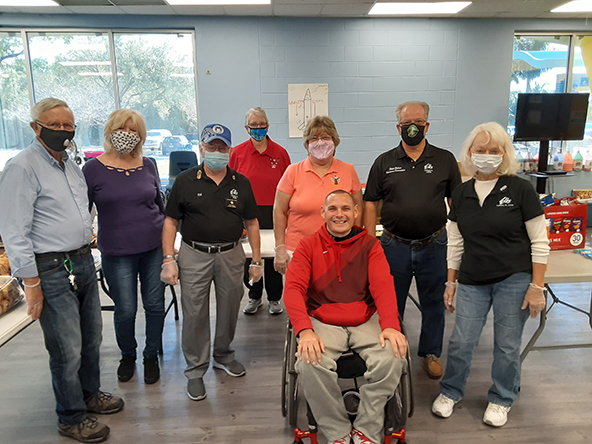 On March 7, members of Largo Lodge’s Veterans Committee attended the rugby tournament at Forbes Recreation Center in Pinellas Park, Florida, sponsored by the Wounded Warriors Abilities Ranch (WWAR), also located in Pinellas Park. WWAR is not a part of the nationally known Wounded Warriors Project. This tournament was open to quadriplegics. Lodge members set up and served lunches to the players and other volunteers. Approximately $500 of the lodge’s Elks National Foundation Freedom Grant was used to purchase the food. Most of the time when these veterans play in tournaments, they must purchase lunch; they were very appreciative that lunch and beverages were available to them. The balance of the grant funds were used to purchase new athletic equipment and supplies for WWAR. Pictured in the front is Mike Delancey, co-founder of WWAR. In the middle row are lodge members Bob Jump, Kathy Traina, Ed Cabana, Tina Morrison, Robert Behm and Jeanne Reinhart, PDD. In the back is lodge member Alice Wallace.