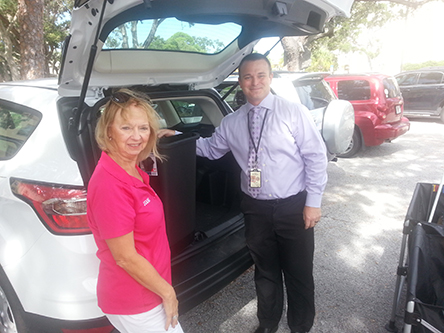 Members of the Largo Lodge Veterans Committee recently delivered the 11th welcome-home kit to the C.W. Bill Young VAMC. The kits are designed for veterans leaving the VA to live independently in their own residence and include small appliances, kitchen utensils, towels, bathroom accessories, bedding, paper products, lamps, dishes and any other items that might be necessary to set up a household. Some items are purchased and some are donated by lodge members. This project is supported by the National Elks Veterans Service.

On Aug. 11, 140 people celebrated veterans at a special dinner and dance. Veterans were treated to a free dinner and a goody bag consisting of a t-shirt and hat. The dinner was catered by Dickies BarBQue and entertainment was provided by Lynn’s Spins.

Jennifer, an Army wife who was advised of the Army of Hope by the Florida Army National Guard, reached out to the program because her family is experiencing a hardship. She is the mother of Daphne, three, and Sophia, 12. Her husband is currently on deployment in Kuwait. as Jennifer explains, “Sophia was born with a chromosomal anomaly which presents many difficulties for her including severe learning disabilities, low muscle tone and the growing potential for seizures as she matures. She also has dyspraxia, a lifelong neurological condition which imparts her executive functioning, coordination, balance, and abilities to read, write and count, among many other things. Lastly, she has moderate autism. As she has grown into her preteens, life is changing to us as we accommodate her in different and more challenging ways.”

Her husband, Chief Warrant Officer Todd Slaughter, has been deployed to the Special Operations Joint Task Force – Operation Inherent Resolve in Kuwait since January 2018. “His absence at home has made raising Sophia very challenging. She cannot ever be left alone and does not engage in typical activities such as sleepovers, childcare, etc. Our days are always spent together.”

Recently, Jennifer and Todd decided to take Sophia out of public school. Though she was given a vast amount of accommodations, the system was still unable to provide a curriculum for her that worked and that she could access. Sophia even had a one-to-one aid throughout her school day, but it was not enough. This past year, in fourth grade, her abilities regressed back to that of a first-grader. It broke their hearts to see her falling so far behind her peers. She became of the age where social interaction was challenging. She was bullied and called stupid and weird. In her last meeting with her school teachers, she was met with frustration on their side as they felt she was in the wrong place with the wrong children. Sitting across the table from them, she felt helpless.

District Army of Hope Chairman, Spike Jones, referred Jennifer to PDD Jim Lamb who interviewed her. He shared her story with Florida Elks Children’s Therapy Services therapist Margo Baker to see if she could help. In a week, Sophia was approved and is now receiving therapy from Baker. At the same time, requested financial assistance from the Army of Hope to help them get caught up on some bills. The Army of Hope wrote a check for $1,500. Lamb received a phone call from Todd in Kuwait thanking him and all Elks for their help.

Lake City Elks Lodge #893 reports that the local VA hospital’s adaptive golf tournament is off to a good start. The lodge donated $600 to help kick off this program. Crafts continue to be popular at the local VA Domiciliary and a field trip is being planned to visit Jacksonville Zoo. Board games donated by the lodge and community are a great source of entertainment for the domiciliary residents as well.

Jupiter Lodge Supports Veterans and is Rewarded in Return

Jupiter Elks have been working tirelessly with Home Depot employee volunteers to fix up the lodge building with new interior and exterior paint, new baseboards, chair railing, and ceiling tiles all made possible through a $19,700 grant from the Home Depot Foundation for the work that the Elks do for veterans. Jupiter has also sent dozens of handwritten letters to military personnel in Syria along with gift cards, and they continue to serve dinners to veterans, their families and caregivers every quarter at the Renewal Coalition, a local nonprofit that assists wounded service members and their families in their transition from military to civilian life or back to active duty. 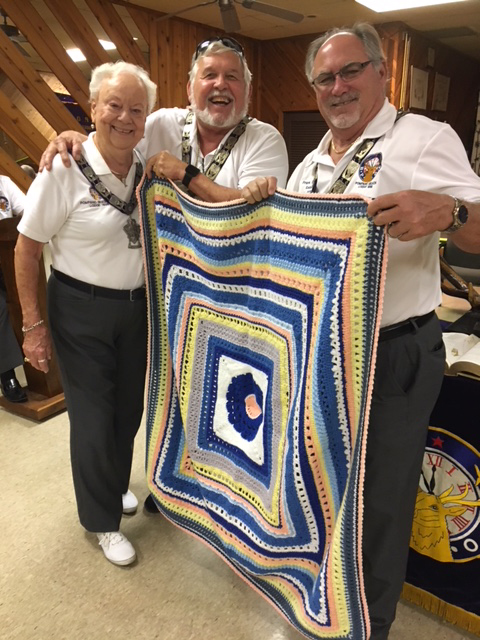 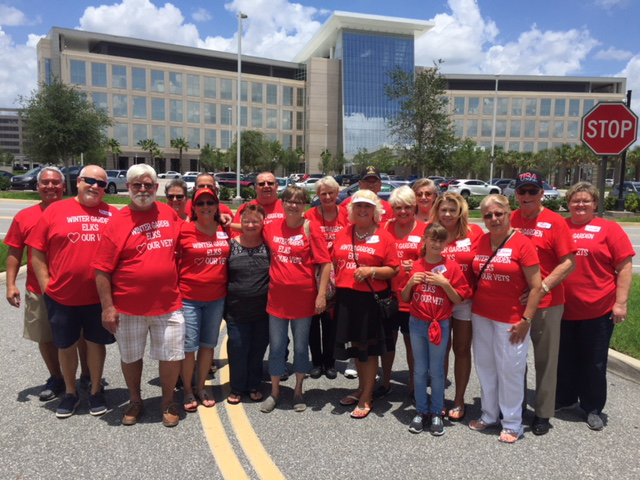 Winter Garden Elks Lodge #2165 used the Elks National Foundation Gratitude Grant to serve 100 veterans, family and staff a barbecue lunch at the VA center. The lodge gave them all t-shirts that say, “Winter Garden Elks Love our Vets.” They also gave out goodie bags with various items and provided karaoke for them. 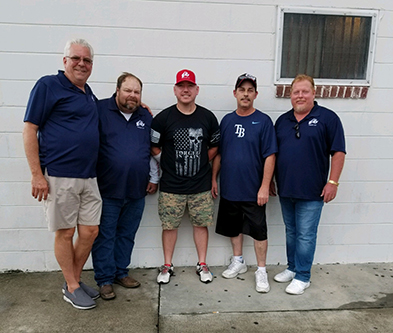 On Jan. 13, Matthew Smith, a single father and U.S. Navy veteran, was involved in a motorcycle accident. While attempting to make a left turn, the driver of the vehicle behind him failed to properly maintain control of his vehicle, striking Smith from behind and totaling his bike. Over the last seven months, he has endured four neck surgeries, a knee surgery, and many physical therapy sessions and doctor’s appointments. Due to the demand of his treatment, he has been unable to provide for his daughter, Shayla, and his son, Braiden. The battle still continues for the next few months and there is a real need for help and support for a man who has fallen on hard times due to circumstances beyond his control.

On Sunday, Sept. 2, a fundraiser on his behalf was held at the Strawberry Patch in Plant City. Elks Ron Johns, Kenny Goodwien and Mark Edelman attended the event and presented him with a $500 check from Plant City Lodge. An additional $1,100 was donated out of their pockets for a 50/50 raffle and auction. Ron Johns won the 50/50 raffle and donated his proceeds back to Smith. Donations will be used to handle monthly expenses (rent, bills, food), medical supplies that are not otherwise provided, fuel for trips to and from doctor's appointments, and physical therapy. 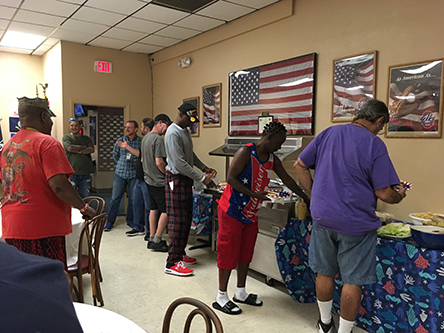 On July 17, Gainesville Elks Lodge #990 hosted 40 veterans who were transitioning from homelessness into their own residences. The lodge used the Elks National Foundation Beacon Grant paired with the 150th Anniversary Grant and state matching funds to purchase all needed items for the veterans to set up their homes. Purchases ranged from cleaning supplies to pots and pans, dishes, towels, blankets, and a wide variety of household and kitchen appliances. Veterans and their HUDVASH social workers were invited for lunch and veterans were given “play money” to purchase the items they needed. This will be a continuing project for Gainesville Lodge as the number of homeless veterans in the area is increasing. 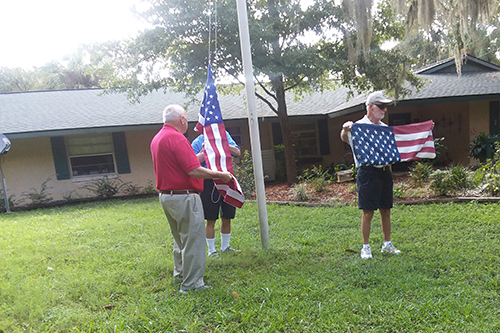 On Saturday, Sept. 22, the West Citrus Lodge Veterans Committee donated an American flag to Crystal Gem Manor Assisted Living Facility. Many of the residents gathered outside to watch the Elks take down the faded and tattered old flag and replace it with a bright new one. As the new flag was raised, they all joined in with the Pledge of Allegiance. Many residents were excited and thanked the committee members. 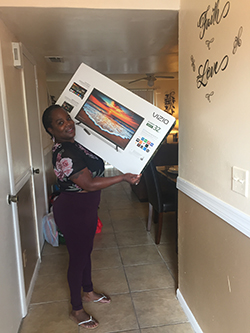 Angel is an Army veteran who needed a little help getting her new apartment ready in time for her child’s arrival from D.C. Tampa Elks were able to come through for her in a big way. First were the bags of items and the microwave that Angel chose from the lodge’s free thrift store for the domiciliary veterans. Then there were school clothes provided by several members. Towels, linens, accessories such as purses, some energy-efficient light bulbs, and a few month’s supply of sanitary products also found their way to her doorstep. She also received the extra school supplies from the lodge’s children’s party. When it was time to go shopping, Angel knew what her biggest remaining need was – a television for her 17-year-old’s bedroom. She also picked up some laundry supplies, paper goods and even a few candles.

The Elks’ Welcome Home program of the Elks National Veterans Service Commission is really making a difference to some previously homeless veterans in the Tampa community.