On Feb. 21, Hollywood West Elks Lodge member and Hollywood City Commissioner, Kevin Biederman, and Hollywood Mayor, Josh Levy, attended the lodge’s ceremony honoring Merchant Marine Seaman Forrest Reed King, Hollywood’s first known resident killed in action in World War II 80 years ago when his ship was hit by torpedoes 125 miles off the coast of Ocean City, Maryland. Sal Grilli, PER, a member of the Lodge Veterans Committee, began the ceremony with a moment of silence at 1341 hours (1:41pm) to memorialize MMS King’s death estimated to have occurred at 1342 hours (1:42pm) Feb. 21, 1942. Grilli gave an account of the life and military service of MMS King.

West St. Lucie Elks Lodge #2823 used its $2,500 Elks National Foundation Freedom Grant along with other donations to purchase 10 tents with mattresses and pillows, 10 jackets, 10 backpacks, 10 blankets and 10 lanterns as well as 259 pairs of socks, toiletries and nonperishable snacks for St. Lucie County Veteran Services. This department helps veterans and their families who are experiencing homelessness. They also assist veterans with obtaining living quarters. 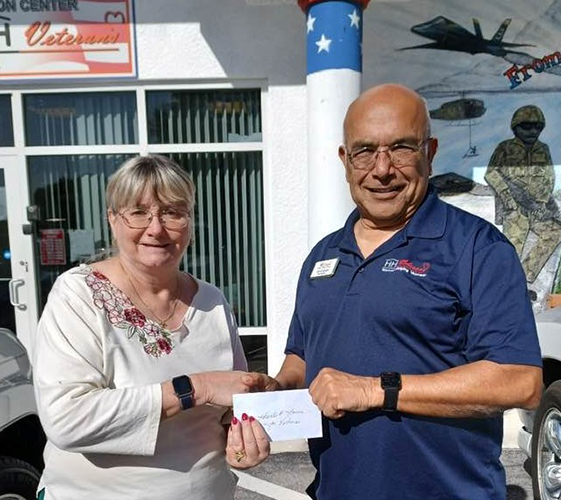 On March 14, several members of Fort Myers Ladies of Elks toured the Hearts and Homes for Veterans facility. Hearts and Homes is a Florida nonprofit corporation created to support veterans and their families who are experiencing homelessness who find themselves without the necessities of everyday life. After the informative tour, Connie Leventhal, Fort Myers Ladies of Elks President, presented David Santini, Director of Hearts and Homes, a check for $350 from the Ladies. The donation came from heart cutouts the Ladies members sold at the lodge throughout February. 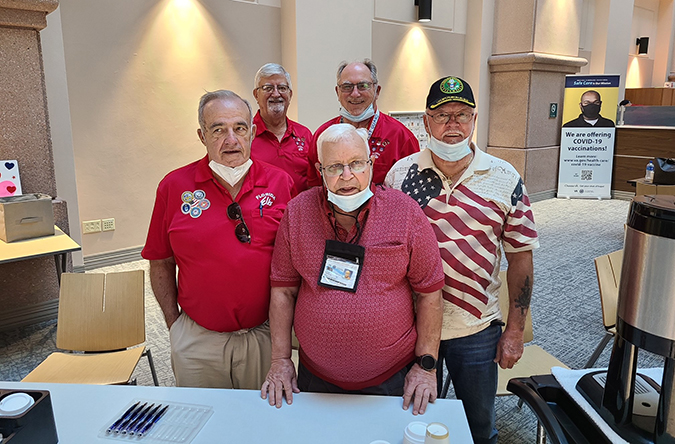 Lodge members from the Southeast District participated in National Salute Week at the West Palm Beach VAMC Feb. 17-18. During this event, Elks passed out snacks, poured coffee and distributed information about Florida Elks Charities to the veterans who very much enjoyed themselves.

Also pictured are Cindy Eldred, PER, State Veterans Chair, and Michelle Harper, PER. 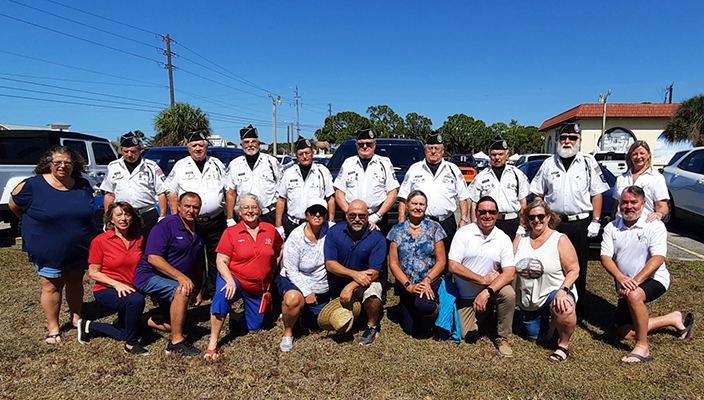 On Feb. 20, Rotonda Elks Lodge #2710 took part in the annual South Southwest District Army of Hope Picnic hosted at Englewood Elks Lodge. The event had participation from the district lodges between Naples and Englewood. The Army of Hope supports Florida families of active deployed military in need. Lee Hale from Rotonda Lodge introduced the Rotonda West American Legion Post 113 Color Guard for the opening ceremonies. At midday, the event total had reached $19,000. Rotonda Elks cooked and served the donated hamburgers and hot dogs and other lodges served their donated food and desserts as well, with 100% of sales donated to the Army of Hope. 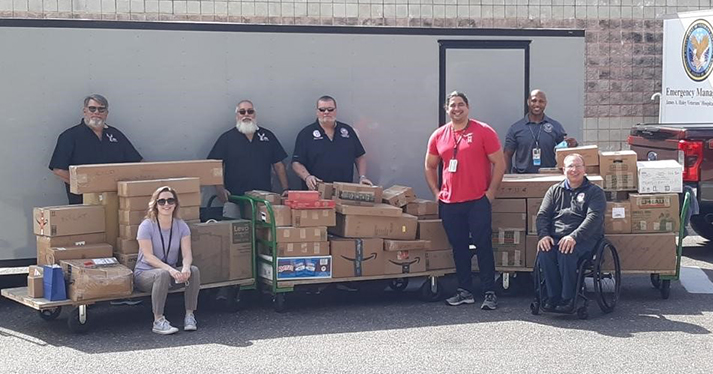 Geoff Hopkins, Supervisor of Recreation Therapy & Creative Arts Therapy at the James A. Haley Veterans’ Hospital in Tampa, Florida, provided the Lakeland Elks Lodge Veterans Committee with a dream/wish list of items they wanted to assist them with their therapy and treatment of patients. On Feb. 18, lodge members delivered all the items on their wish list, which filled a trailer and totaled just over $11,100. Hopkins and his staff were speechless. The donations included various craft kits (stained glass, sewing, etc.), wooden 3D puzzles, an engraving machine, a Cricut machine, paint by number pictures, supplies to go with all the crafts, vinyl, paint, wooden squares, paintbrushes, trays, tools, jigsaw puzzles, board games, card games, an iPad rolling floor stand cart, five gooseneck floor stands for iPads, baseballs, mitts, tennis rackets and balls, basketballs, laser tag games, and disc golf. One of the staff members shared, “We are truly dumbfounded that you all gave us (therapists) so many things we can do with, and for, our veterans. We will undoubtedly have wonderful treatment interventions in the future because of your work and generosity.” The lodge purchased these items using funds raised at their November record-breaking fundraising event, which raised just over $22,000 for veterans’ causes.

Pictured in the back left are members Chuck Wolfe, Rob Swann, and Steve Masterton, PER who made the delivery. Geoff Hopkins is pictured in the front right along with some of his staff members.

On Jan. 29, the Southeast Central District hosted a fundraiser for the Army of Hope at Vero Beach Elks Lodge #1774. The Army of Hope is a charity of the Florida Elks and assists veterans and their family members financially or otherwise. The event was attended by 85 members and guests from the district lodges and included a performance by Re-Creation. After the show, the members and guests talked with the cast and posed for pictures. Everyone in the audience was impressed by this group of young entertainers and how much they care about veterans. The event raised more than $2,000. 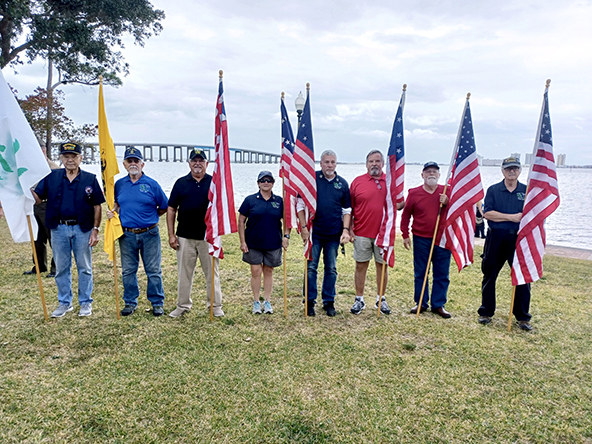 Holley-Navarre Elks Lodge #2787 attended the annual Veterans Day remembrance ceremony at the Navarre Black Hawk Memorial Park in Navarre, Florida. Other attendees included Navarre High School Navy Jr. ROTC cadets presenting flags along with the support of Holley-Navarre Elks, Santa Rosa County Commissioners, Boy Scouts, American Legions, area businesses and local churches. The ceremony opened with a prayer, a poem reading and historical readings to remember those we have lost and to show support for those veterans still with us. Wreaths were also presented by several organizations, including the lodge. 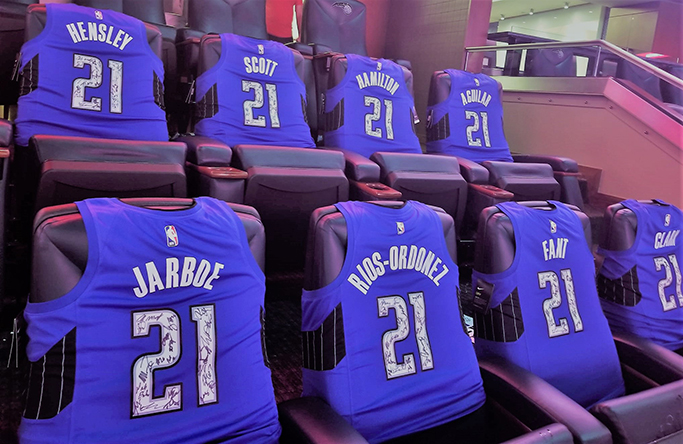 On Nov. 13, Sanford Elks Lodge #1241 sponsored 52 seats at a total of $500 for veterans and their families at the Seats for Soldiers Night presented by Orlando Magic, Mission Zero Actual and L3Harris at the Amway Center in Orlando, Florida. Seats for Soldiers honors and hosts military members and their families at an Orlando Magic game and features several activities and entertainment. Prior to the game, fallen soldiers are honored by the team holding their jerseys with each soldier’s name listed on the back.

Pictured are the jerseys, each signed by the team players. 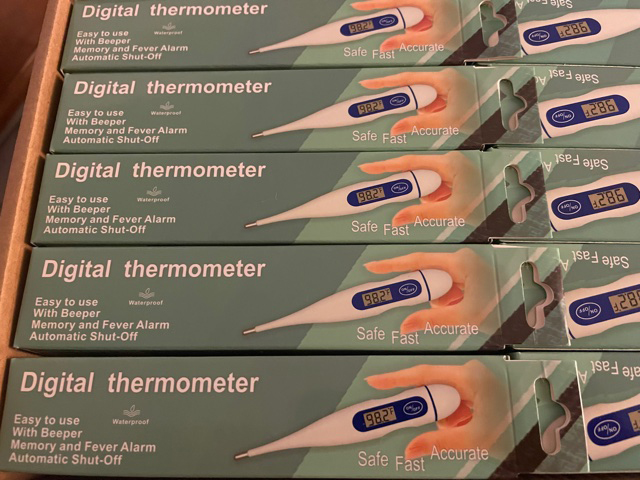 On Jan. 25, St. Petersburg Elks Lodge #1224 donated 400 digital oral thermometers to the chemotherapy unit at the Bay Pines VA Hospital. Each chemotherapy patient takes one home and can check their temperature at home, making sure they do not have a fever. This saves them a trip if they do, because they cannot get the treatment needed at that time. The value of the thermometers is $400.

Pictured are some of the thermometers.

Details
Written by Mike McClay, PER 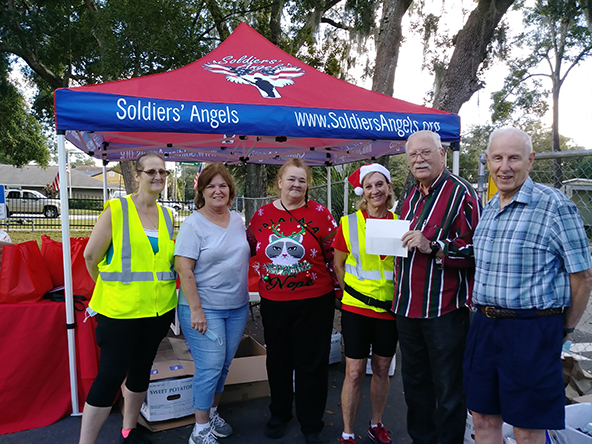 Orlando Elks Lodge #1079 shared its $3,500 Elks National Foundation Beacon Grant with Soldiers’ Angels (SA) in the Orlando area. Soldiers’ Angels is a national organization that assists service members and veterans and their families. The lodge earmarked $2,500 for food, which will cover about 75 pounds of food for 230 veterans’ families in January. The additional $1,000 will be used to purchase housing packs for veterans who are homeless.

In partnership with news channel 10 Tampa Bay, Brandon Elks Lodge #2383 collected $2,800 worth of toiletries and other items for the nonprofit Support the Troops. Marionette Sexton, Leading Knight, organized the collection and asked lodge members to donate some of the five most requested items by military members serving overseas in remote areas. Lodge members and Brandon Ladies of the Elks generously donated white tube socks, toothpaste, beef jerky, gum and hard candy during December. In the first week of January, a representative from 10 Tampa Bay stopped by the lodge to pick up the donations and deliver them to Support the Troops. These donations were packed in care packages and sent overseas.