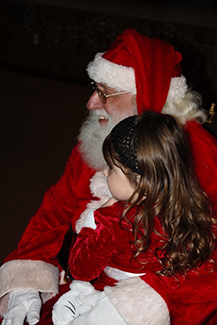 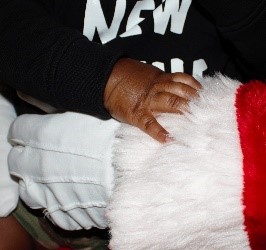 On Dec. 14, Aripeka Lodge hosted its third annual Guardian Ad Litem Christmas gift party for children who are placed in foster care by the courts. Lodge members used an Elks National Foundation Gratitude Grant to purchase 26 bicycles and 24 tablets to help make Christmas a special day for these children. In addition, Guardian Ad Litem of Pasco County collected hundreds of presents from community businesses and other community members to make sure the 35 tables in the large hall were covered with presents. The children and their foster parents were treated to hot dogs, chips and soda. The lodge’s own Santa and Mrs. Claus were a big hit among the children. 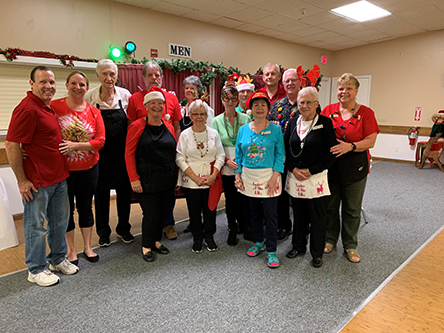 Once again, West Citrus and Inverness Elks lodges teamed up to host foster families of Citrus County at a dinner held at West Citrus Lodge Dec. 15. The children received gifts as well. This annual event provides the foster families an opportunity to meet and share the challenges and triumphs of being a foster parent. Pictured are volunteers from both lodges including members, spouses and Ladies of Elks – (back row) chef, Dave Vergil; West Citrus outside coordinator, Karin Nottage; Vinnie Gonzales; Mike Quade; Doreen Tortorella; Barry Grace; Charles Jancura; House Committee chairman, Scott Zakszeski; and Teresa Jancura. In the front row are Lucille Lareau, Bonnie Lee, Linda Zakszeski and Eppie Demchak.

Details
Written by PER Ken Fabiani 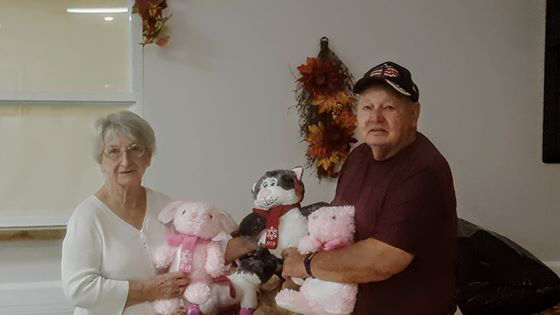 With the support of Tracy Hanson, Director of Caterpillars to Butterflies Foundation in Dade City, Fla., and Ken Fabiani, PER, Zephyrhills Lodge Veterans Chairman, the lodge donated 50 stuffed animals for the Christmas party held Dec. 11. The foundation supports children’s growth and creativity. Having the party brings smiles to children as they sit on Santa’s lap, sing Christmas carols and dance after their meal. Pictured are Dottie Sollmann, special citizens Christmas party chairperson and Ken Fabiani, PER.

Details
Written by PER Ken Fabiani 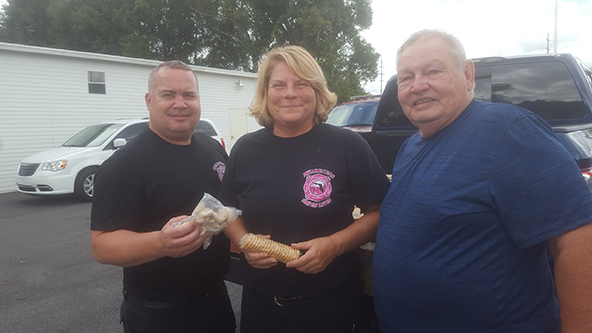 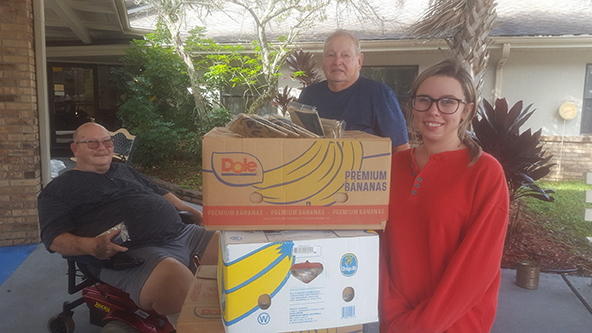 On Oct. 26, Zephyrhills Lodge and the Veterans committee donated cookies and popcorn at a value of $750 to Rose Castle Nursing Home, Westbrook Manor Nursing Home and Zephyrhills Fire Department. 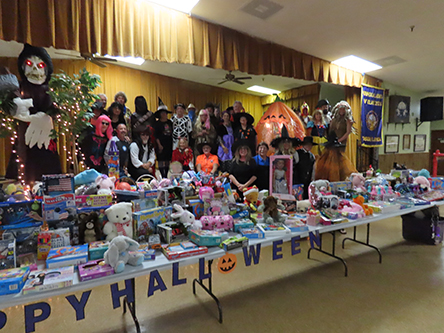 On Oct. 24, Aripeka Elks Lodge #2520 used an Elks National Foundation Beacon Grant of $2,000 to hold a Halloween party for over 160 children and young adults from the community who are severely disabled. The annual event is named after deceased lodge member Hal Steffes and was started in 1987. The party featured a haunted house staffed by costumed lodge members who gave each passing person an abundance of candy and trinkets to their delight. This event also featured a lunch consisting of pizza, hot dogs, French fries, and ice cream along with the distribution of candy and several gifts for each person in attendance.

Kissimmee Lodge purchased and delivered 619 student dictionaries to four elementary school third graders in the county Oct. 21. They also included drug awareness red ribbons in the dictionaries to serve as bookmarks. Funds for the dictionaries came from private donations and the lodge’s charity account. 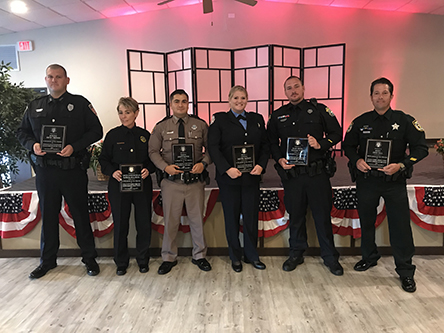 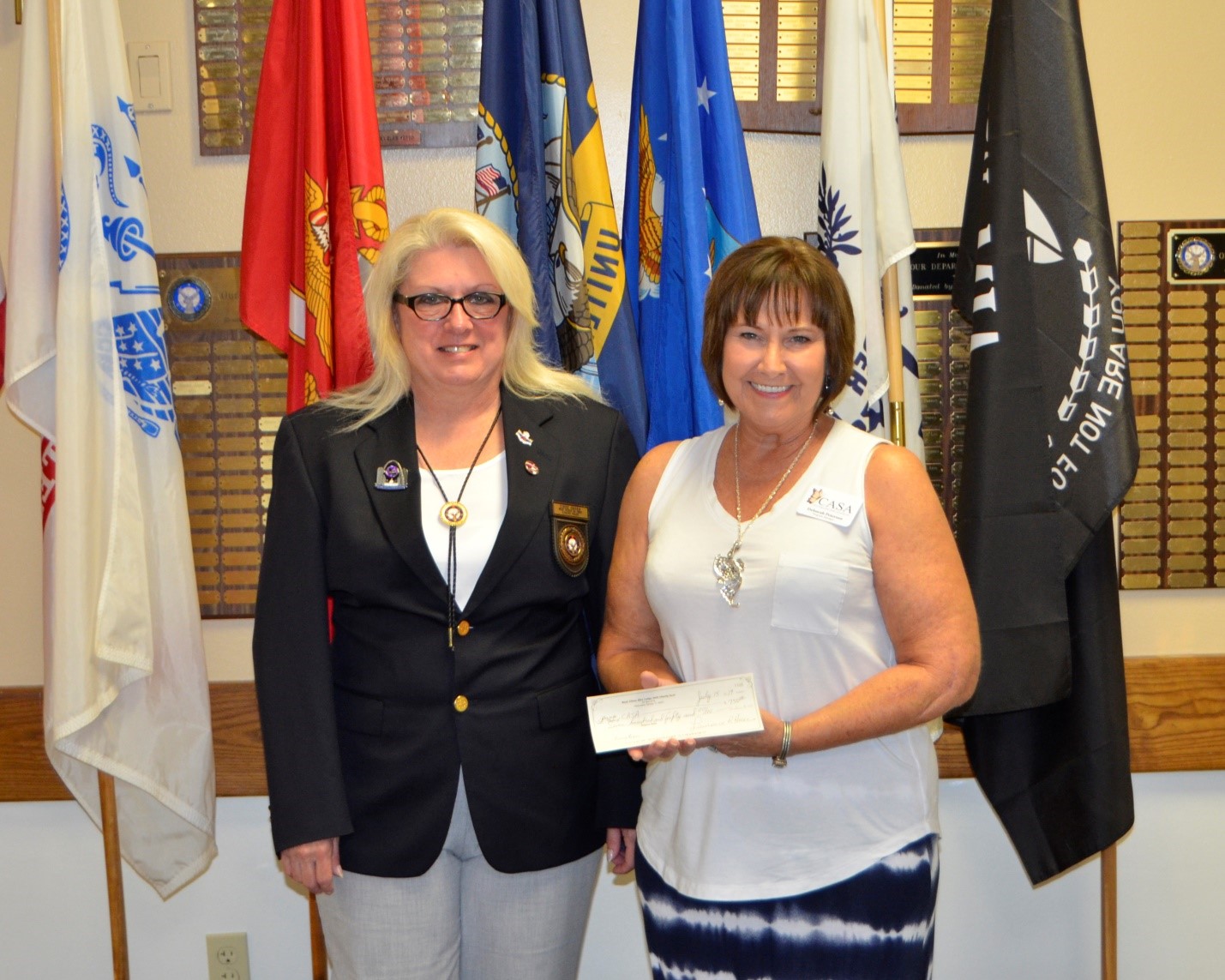 Details
Written by Ken Fabiani, PER 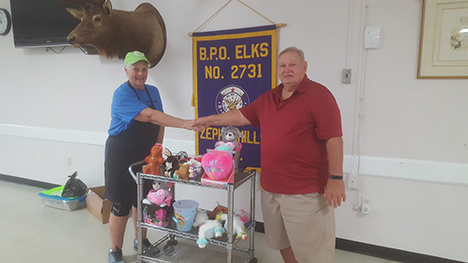 On June 3, the Veterans Committee of Zephyrhills Elks Lodge #2731 donated toys to the lodge’s Feed the Kids program, the first day of this year’s program. The committee will continue to donate toys each Monday until the program is complete in August. The Feed the Kids program is in its fourth year at the lodge. Children and caretakers can visit the lodge for lunch Monday through Friday. The lodge also provides games for the children. Members also volunteer to read and help the kids with their reading. They have a library from which the kids can take books home. In the program’s first year, 500 were fed. Last year, the total was over 4,000, and this year’s goal is 5,000.

On Feb. 12, Shirley Crawford of Zephyrhills Elks Lodge #2731 and Terry VanAlstine of New York’s Canojoharie-Fort Plain Elks Lodge #2621 delivered more than 170 pounds of pop tops to the Shriners Hospital in Tampa, Fla. Canojoharie Moose Lodge #853 also collected tabs. As always, the hospital was thankful for the donation which will be returned to them as cash to fund their programs. 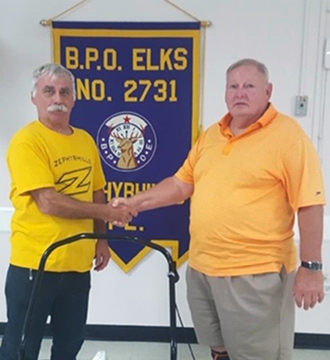