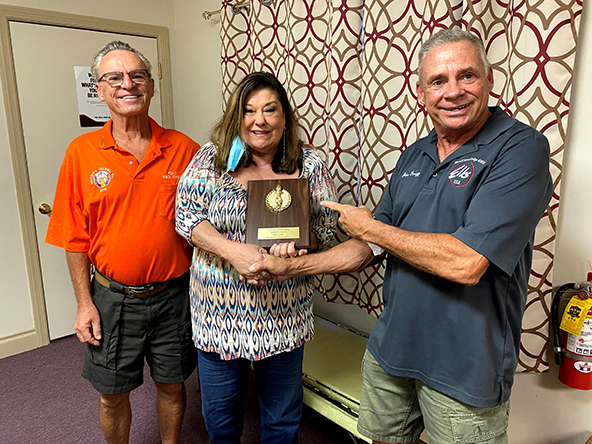 On Oct. 7, Merritt Island Elks Lodge #2650 used its $2,000 Elks National Foundation Gratitude Grant to help a local learning institution purchase some badly needed computers for the teachers and students. The Brevard Private Academy in Merritt Island, Florida, is a school for kids who don’t fit into the public school system. This school keeps these kids from falling through the cracks and gives them the opportunity to get an education. Because the grant did not cover all the equipment needed, the lodge added an extra $1,686. Cheree Shaykhian, president of the academy, started to tear up as she thanked the lodge members and presented the lodge with a plaque. Pictured are Kim Johnson, Lodge Secretary; Shaykhian; and Jim Gregg, Exalted Ruler. 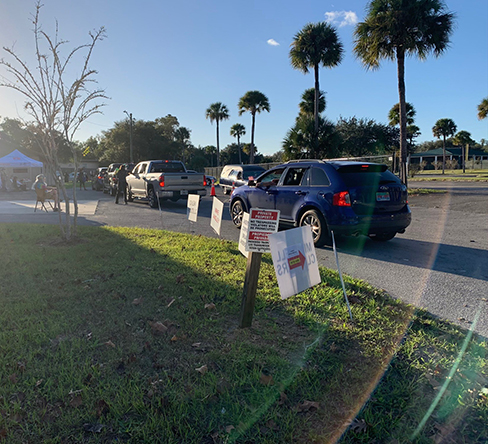 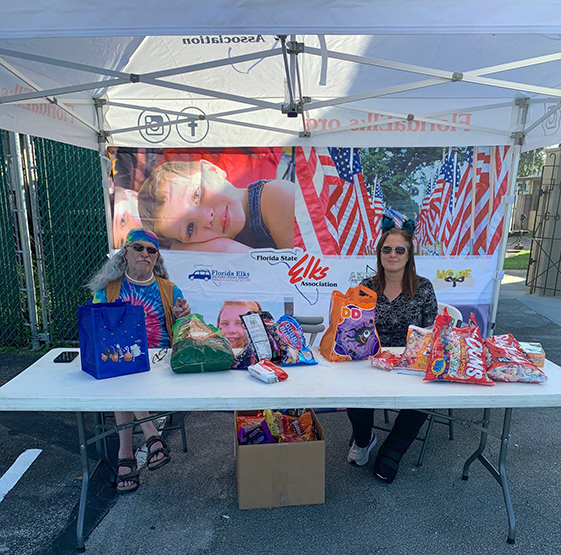 On Oct. 31, DeLand Elks Lodge #1463 and three local businesses participated in a community contactless Trunk or Treat Halloween event, each at their own locations. There were 211 cars that attended their drive-thru. The Elks distributed thousands of pieces of candy to over 500 children along with Drug Awareness coloring books. All the candy and pretzels were donated by lodge members. Pictured along with the drive-thru are lodge members Warren Kerswill and Desiree Templeton. Other members dressed up in costumes for the event as well. 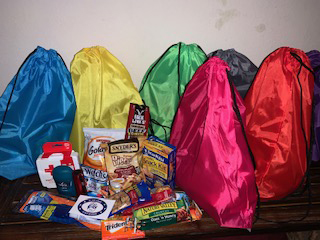 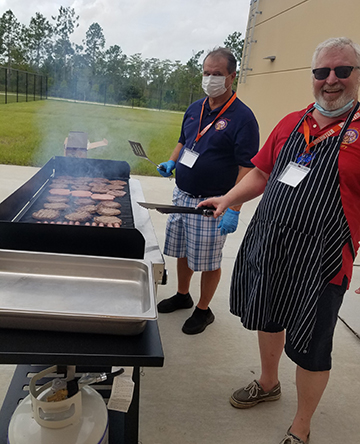 On Aug. 22, Port Orange Elks Lodge #2723 held its first luncheon which will be a monthly event at the First Step Homeless Shelter in Daytona, Florida. The grill used to cook the luncheon was purchased by the lodge along with a grill cover, propane tanks and propane using $696.70 from its $3,500 Elks National Foundation Beacon Grant. Along with the grill, members donated $450 to purchase bags, snacks and supplies which were distributed to the residents of the shelter. The shelter operates a safe zone where people experiencing homelessness have the option to become a temporary resident or just spend the day. Operating the grill are Dan Black, trustee, and Gary VanOpdorp, PER, Exalted Ruler. 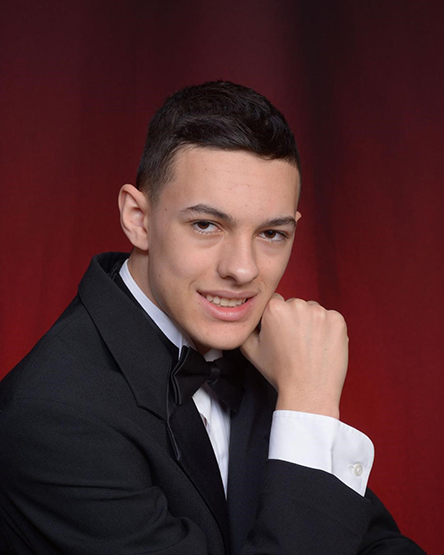 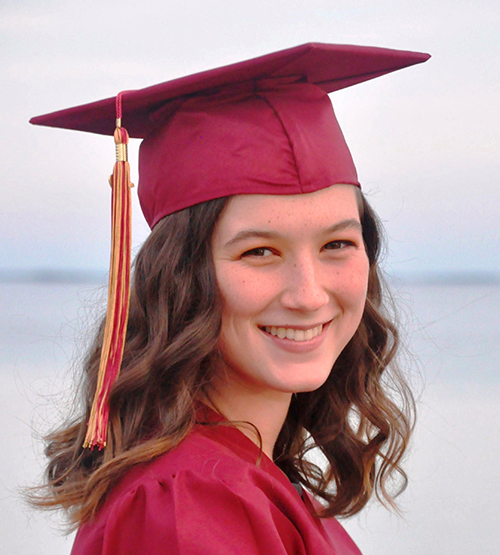 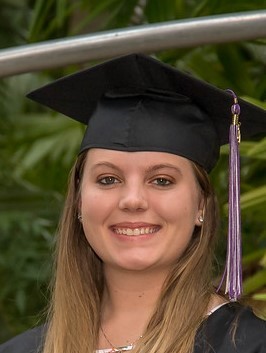 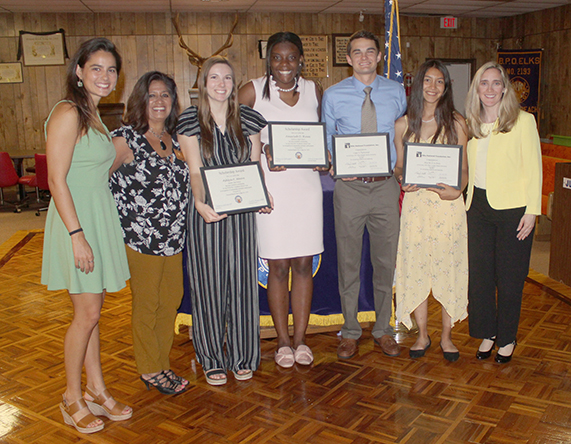 Ormond Beach Elks Lodge #2193 awarded three lodge scholarships in the amount of $750 each to local high school seniors June 26 at the lodge. Recipients were Ana Sanchez and Logan Stewart of Seabreeze High School and Ryan Waddell of Father Lopez Catholic High School. Students were presented with scholarship certificates following a steak dinner for the recipients and their families. Most of the schools these students attend did not host an in-person senior awards ceremony. Pictured are Michael Chandler, PDD, Scholarship Committee member; Ana Sanchez; Ryan Waddell; and Erika Barger, Lodge Scholarship Chair and Vice President of the East Central District. Logan Stewart was unable to attend the presentation.

DeLand Lodge donated $1,000 of its Elks National Foundation Beacon Grant to the Pregnancy Center of Deltona which provides services such as pregnancy tests and referrals to OB offices to females who are homeless or who have low incomes. They also supply new mothers with diapers, formula and other newborn needs. 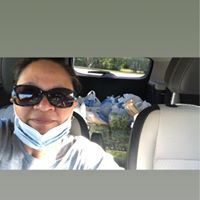 During the coronavirus pandemic, DeLand Elks Lodge #1463 has partnered with Neighborhood Center of West Volusia in DeLand, Florida, by providing grant money to stock their pantry. The lodge donated its $2,500 Elks National Foundation Gratitude Grant, its $2,000 Elks National Foundation Spotlight Grant and $1,500 of its Elks National Foundation Beacon Grant to the center. Members also donate nonperishable items. The Neighborhood Center provides an emergency food bank, food pantry, emergency bill assistance, emergency housing, counseling, referral services and living skills groups. Another service the center provides is the delivery of food to seniors who are homebound. Davina Watercutter, Lodge Secretary, volunteered to be a driver on behalf of the lodge. She delivered canned goods, meat, bread, desserts and other dry pantry goods to seniors who could not afford food or who could not go out in public due to transportation or medical reasons. Watercutter describes her volunteering. “As secretary of the lodge, I felt that I needed to lead by example what Elks are all about. We have many new members and they need guidance. What better way to show them and possible new members what we do for our community. Delivering to these seniors made a difference in their lives as it did mine. Many of them have no money. What was even more amazing was I would deliver the food and they in turn would share their food with neighbors!” Watercutter is pictured April 21 in her vehicle on a delivery day. 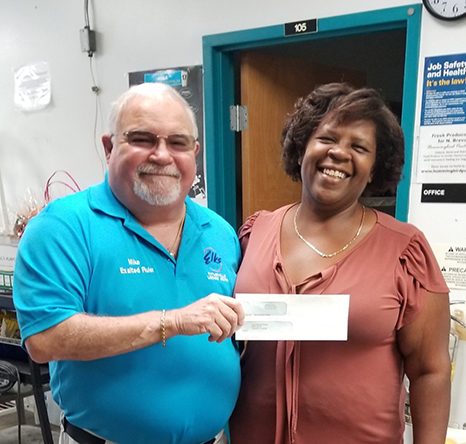 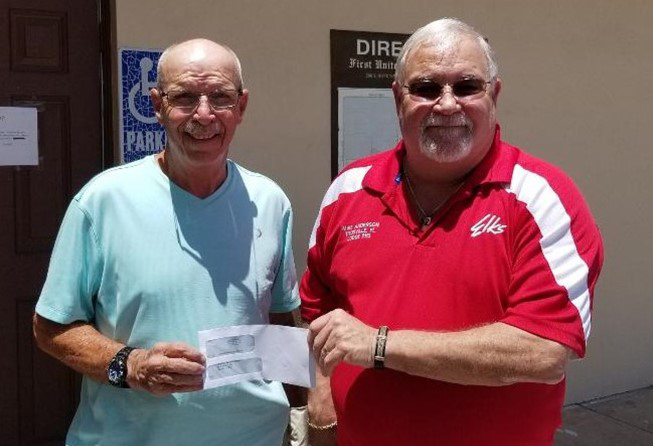 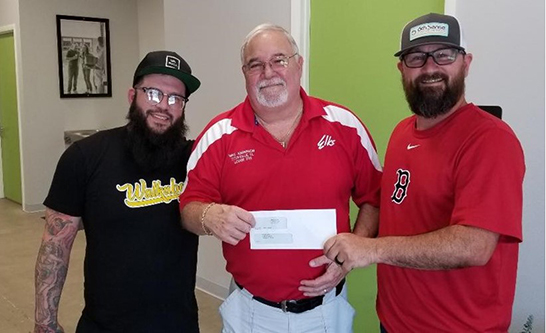 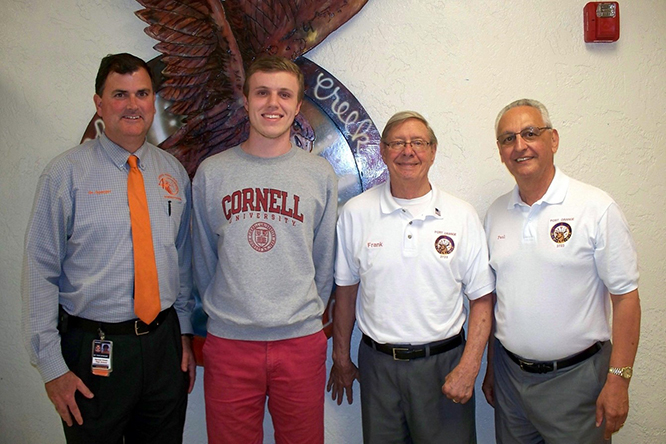 Port Orange Elks Lodge #2723 provided an update on one of their 2016 Elks National Foundation Most Valuable Student scholarship winners – Dalton Price – who went on to be the highest-scoring male applicant from Florida, later giving a speech at the Florida Elks state convention in which he expressed his gratitude to the community. A graduate of Spruce Creek High School, he began his freshman year at Cornell University in Ithaca, New York, in August 2016 studying anthropology and infectious disease biology. Working in a variety of health care sectors over the years, he has been able to develop his interest in infectious disease outbreaks and public health responses. Domestically, he has worked with Aetna, The Microbiome Coalition, The diaTribe Foundation, and four research institutes and has received funding to write a book about the U.S. health care system. Over time, he has become more interested in international contexts and worked with the World Health Organization, Partners in Health and other groups in Malaysia, Egypt, Jordan and Peru. For his work, he was awarded the Future Global Leaders Fellowship, Jack Kent Cooke International Award, Gateway Kingdom of Saudi Arabia Fellowship, John F. Kennedy Memorial Award, Forbes Under 30 Award and nearly 10 research grants. Additionally, he has published opinion pieces with HuffPost, Common Dreams, Daytona Beach News Journal and the Cornell Daily Sun.

In the wake of the coronavirus pandemic, Price has returned home early from his senior year at Cornell and is now working with the Florida Department of Health on the Volusia response. He will travel to the United Kingdom in October to begin his doctorate degree in medical anthropology at the University of Oxford. For his graduate research, he will spend three to four years traveling between the UK and Venezuela studying how political climates and forms of government impact the trajectory and spread of infectious disease. After completing his doctorate, he plans to move to New York City and start medical school at Mount Sinai’s Icahn School of Medicine where he will specialize in infectious disease medicine and global health.

As a physician-anthropologist working in global health, Price hopes to move the field of infectious disease response forward with new perspectives. Though creating healthy populations raises many medical questions, he believes there are also countless social, political, economic, cultural and environmental concerns that must also be addressed.

In the long term, he hopes to one day become Florida’s Surgeon General. After his tenure there, he hopes to move into more international spheres and work in a high-level capacity with the World Health Organization. He is deeply grateful for the amount of support he has received from the Elks community, especially Port Orange lodge. He wholeheartedly believes in the African proverb “it takes a village” and considers the Elks part of his village, one that is deeply invested in his success and one he plans to give back to along the way. Pictured at Spruce Creek High School in 2016 are Dr. Todd Sparger, principal; Price; Frank Kuczkowski, Exalted Ruler; and Paul Leonard, scholarship chair. 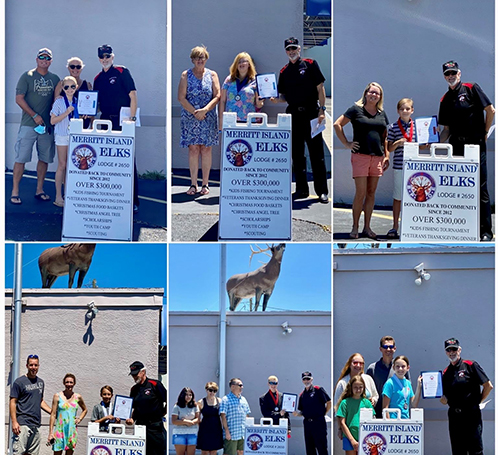 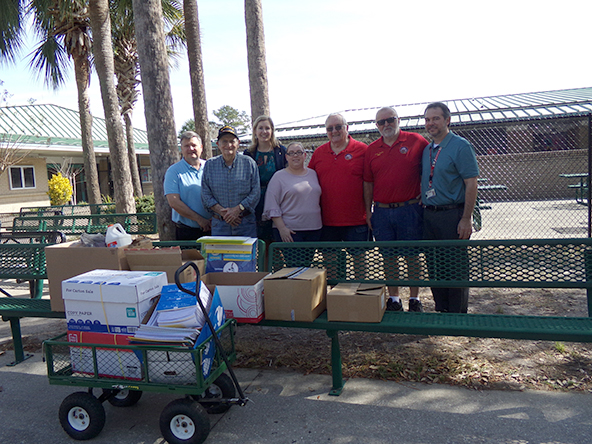 On Feb. 14, Port Orange Elks Lodge #2723 teamed with the Vagovic & Abend Law Firm from Daytona Beach, Florida, and Advanced Air to donate school supplies to Horizon Elementary School in Port Orange, Florida. They know that schools are always in need of items and many times they are purchased by teachers for the children or they just go without. The lodge donated $425 and the other sponsors donated a total of $500. Pictured are Gary Harms, principal; Art Rauch, lodge member; Chelsea Abend and Amanda Goodwin of Vagovic & Abend Law Firm; Richard Violette and Larry Lewis, PER, lodge members; and Doug Miller, guidance counselor.